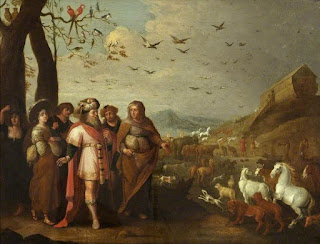 Thomas Carlyle argued for the “great man” theory of history, that "the history of the world is but the biography of great men." The unique traits of great leaders allows them to transform everyone and everything around them, and change the course of history. And while the great man theory has lost favor in recent years, undoubtedly it is partially true. There are many historical figures that did change the world; for example, America would not be the same without Washington and Lincoln, and Israel would not exist without Herzl.

At first glance, the narrative of the Tanakh is also the biography of great men; most of the focus is given to larger than life individuals. Characters such as Avraham, Yoseph, Moshe, David and Shlomo take the center stage, and then direct the course of action. The abilities of these heroes is amplified in the Midrashim and other Rabbinic commentaries, leaving them with truly larger than life attributes. These great men are our heroes.

This focus on greatness has had a profound impact on Jewish culture, and has made greatness a life goal to be embraced. Many have taken the view that the entire educational system should be focused on developing the elite students, even if it means abandoning the needs of the other students. Rav Eliyahu Dessler, when contrasting the Lithuanian Yeshiva system with the educational system of early-20th-century German orthodoxy, wrote that the goal of the Lithuanian system is to create great scholars, even if it means under-serving the other students. He based his view on a Midrash that says “one thousand students enter to study Bible and only one comes out as a great Talmud scholar.”

This aspiration for greatness affects the perspective of parents as well. Maimonides makes a telling remark when he writes that a person “should set his heart to have a son who perhaps will be a wise and great man in Israel.”

This is the “great man” theory of child rearing, in which our expectations for our children are geared to greatness. David Bader highlights this in a comic Haiku entitled the “Jewish Mother’s Lament”:


“Is one Nobel Prize
so much to ask from a child
after all I've done?”

For better or for worse, the Jewish community has put the “great man” theory into practice.

But there are other models of a proper life. Noach, the title character of our Parsha, is a perfect example of ordinary greatness. The Torah itself is unclear on how to describe Noach. He is considered worthy of being saved because he is a “righteous man,” which is high praise; but we are also told that “he found favor with the Lord,” which implies that he was somewhat undeserving, and saved because of his charisma. And then in a third verse there is a qualifier, “righteous before Me in this generation,“ which leads one to wonder whether Noach’s righteousness was merely relative to the rest of his generation, who were deeply immoral. For this reason, the Rabbis of the Talmud debate whether Noach would have been greater had he lived at a different time, and they speculate whether or not he could have been as great as Avraham.

But perhaps we need to stop comparing Noach to Avraham, because Noach does not conform to the usual models of greatness. Instead, he is a good person who steps up to the plate when needed, the right man who arrives at the right time. The Torah’s ambiguity about Noach is intentional, because Noach is both good and great at the same time.

Noach’s character defies the rigid fundamentalism of greatness; he reminds us that one can be a humble man of the earth and still save the world. And he is far from the only one in the Tanakh who exhibits ordinary greatness; Ruth, Esther and all the leaders in the Book of Judges are ordinary people who make an extraordinary impact. Their goodness is their greatness.

Ordinary greatness is the foundation of the Chassidic tradition of the “lamed vuv tzadikim,” the 36 hidden righteous men who uphold the world. They appear like ordinary men and live ordinary lives, yet in undertaking an important act of piety or charity, these ordinary Joes save the world. The lamedvuvnik offers us an alternative paradigm of greatness: a good man quietly doing good things, on the periphery and away from the limelight. The beauty of the lamedvuvnik tradition is that it forces us to consider that anyone might be great, even the common man; and who knows, maybe the gruff, grizzled and wrinkled water carrier in the back of the tiny synagogue is carrying the fate of the entire world on his shoulders.

Gershon Scholem has noted that this idea of hidden righteous men, lamedvvuniks, has some basis in the Talmud; and in a larger sense, there are many talmudic stories about jesters, pimps and thugs who find a distinguished place in the world to come because of the good deeds that they do. It is interesting that the Chassidic movement, which is oriented around the tzaddik (a great man who functions as a divine intermediary), gave so much attention to the simple looking lamedvuvnik.  But perhaps that is the point: even when recognizing great heroes, the quiet contributions of everyday heroes must never be forgotten.

This lamedvuvnik is an excellent role model for those who feel conflicted about their goals, uncertain about whether they must always pursue the next great possibility. Parents in particular are often torn between their career and their children. And, for anyone, every new opportunity requires new sacrifices. There are times when people don’t choose the path of greatness because they have other priorities, and the lesson of the lamed vuv tzadikim is you don’t need to do it all; you just need to do good.

The lamedvuvnik life is a model of understated greatness, to change the world one person at a time. George Elliot expresses this idea beautifully when she writes at the end of “Middlemarch”: "The growing good of the world is ... half owing to the number who lived faithfully a hidden life, and rest in unvisited tombs."

In the course of my career I have met many people from all walks of life, but it’s the lamedvuvniks that inspire me the most. One of them was Harold, who was the “candyman”  of my previous congregation; he was the person who gave out sweets to all the children in the synagogue, and the greeter who helped people find their seats. When he passed away his funeral was filled to capacity; the staff at the funeral home were curious, wondering why Harold was famous. Harold’s resume said he was a retired insurance salesman, but as I explained in my eulogy, Harold was a lot more:

“What was it about Harold that was special? Harold was not a wealthy man, (although he was more contented than virtually anyone). He was not a Nobel prize winning scientist, (although he had more common sense than anyone); he was not an Olympic athlete, not a cabinet minister, and you didn’t see his name in the newspaper. Fame and fortune were not Harold’s calling card.

Harold knew the lamedvuvnik credo: change the world one person at a time. In the course of our lives, every one of us has met our own, personal, lamedvuvnik: a parent, teacher, friend, or even a stranger who has made an enormous difference in our lives.

Sometimes, you can be great just by being good.

Posted by Rabbi Chaim Steinmetz at 11:57 AM