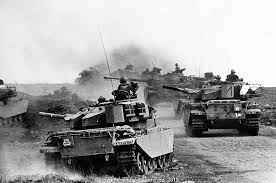 “The one thing I was certain of was that the world would never be the same”. Twenty one year old Haim Sabato goes to the battlefront in the Yom Kippur War, brimming with confidence. Israel had defeated the Syrian army in just six days a few years earlier, he had gotten a blessing the previous night from an elderly Chassidic Rebbe, and he was traveling together with his childhood best friend and study partner, Dov Indig. Haim expects everything will follow according to plan; the good guys will win, the righteous will be protected, and he and Dov will continue to study Talmud and Bible together. In “Adjusting Sights”, published in 1999, Sabato relates what happens next.

As Dov and Haim arrive in the Golan, panic and disorder meet them at the door of their bus. Even though they had always been in the same tank, desperate commanders were grabbing soldiers right off the buses adding them to makeshift crews. Haim goes with one crew, Dov with another, and enter into one of the most violent tank battles in the history of warfare. Haim’s crew is saved from certain death at the last moment; but Dov never returns from battle.

The rest of the book is filled with Haim’s singular quest to find out “what happened to Dov?”. Haim has lost his best friend, and in his grief, searches for a way to reconcile his own optimistic faith with an ugly, ungodly world that can instantly claim the life of a righteous man like Dov.

I read Adjusting Sights during a painful period in my own rabbinate. In the course of 18 months, I had officiated at 6 tragic funerals: A 9 year old who died of an aneurysm, a 27 year old newlywed who died after routine surgery, and four young people in the thirties with cancer. The pain that these families endured was indescribable.  As a Rabbi and a friend, I felt like I had nothing at all to offer the mourners. Answers? There is no such thing. Optimism? It is deeply insensitive to offer positive thinking to the victims of tragedy. As a Rabbi I felt like a fraud; as a human being, I felt insecure.

As I sought to regain my bearings, I was pulled in two directions: towards life and towards death. Yes, they are opposite directions; but in many ways, they actually complement each other.

The Jewish instinct, honed through generations of persecution, is to immediately grab hold of life. Even the first shiva meal is a reminder to look for life. The tradition is that this meal is brought to the mourner by their neighbors. A 16th century Rabbi, Yehoshua Falk, writes[1]  that the reason we bring the mourners this first meal is because “the mourner is in grief and torment over their deceased, and doesn’t think about eating…..therefore we command him to eat the meal brought to him by others”.

One of the most painful things a mourner has to reconcile with is that life in the future is now a life without. Swallowed up in grief, eating seems pointless, a waystation to futility. Then neighbors arrive with plates of food, a gentle reminder that even in grief you cannot escape friendship. The community does its best to support the heartbroken until they are ready to turn to, and return to, life.

Rabbi Joseph B. Soloveitchik sees this idea as central to the theology of Judaism.  In 1944, Rav Soloveitchik, who was then 41, published Halakhic Man, where he emphasizes the Jewish focus on life. He writes “Judaism abhors death...it bids one to choose life and sanctify it. Authentic Judaism...sees death a terrifying contradiction to the whole of religious life[2].”. Rabbi Soloveitchik adds that his father, grandfather and great grandfather, all prominent Rabbis, never visited cemeteries because it would have distracted them from their mission to pursue life.

During the dark years of exile, while struggling against the forces of hatred, Jewish communities always turned to life; when struggling for survival, a community doesn’t have the luxury of self pity. Israel’s response to the intifada is a powerful example of this. Greg Myre and Jennifer Griffin, two journalists who wrote about their years in Israel between 2000-2007 explain that: "We were consistently amazed at how quickly Israelis returned to places that had been bombed. The police, the rescue teams and the cleanup crews restored a bomb site to an outward semblance of normality within hours of an attack. Debris was swept out. Hoses washed away blood from the sidewalk. Shattered windows were replaced. The yellow police tape came down.…. For Israelis, combating terror is not just a security question. It's a social, cultural and psychological issue and the whole country is required to play its role. It's often measured in small deeds, like going back to a favorite cafe after an attack[3].”

This communal resilience has allowed  Israel to survive through an unending barrage of attacks. Prof. Dov Waxman has said that: “Despite experiencing numerous traumatic events during the second Intifada, which should logically cause progressively more psychological damage, the rate of PTSD symptoms among the Israeli population remained at a fairly low level…..The concept of social resilience, therefore, helps explains why Israeli society was not demoralized by repeated terrorist attacks, despite the serious effects these attacks had on Israelis….”[4]

Jews throughout history have coped by turning to life. But there is one problem; it simply doesn’t work when staring into the face of the Angel of Death.

Fifteen years after writing Halakhic Man, Rav Soloveitchik faced colon cancer. (He was diagnosed just a few weeks  before his daughter’s wedding).  In a later essay[5], he describes his emotions:

The night preceding my operation I prayed to God and beseeched Him to spare me, I did not ask for too much. All I wanted was that He should make it possible for me to attend my daughter's wedding, which was postponed on account of my illness—a very modest wish in comparison with my insane claims to life prior my sickness. The fantastic flights of human foolishness and egocentrism was distant from me that night…..

This frightening diagnosis changed everything for Rav Soloveitchik. Desperately bargaining for a chance to go to his daughter’s wedding, he learns that the most profound lessons about life are learnt in death’s shadow. He writes that:

“When one's perspective is shifted from the illusion of eternity to the reality of temporality, one finds peace of mind and relief from other worries, from his petty fears and from absurd stresses and nonsensical nightmares. ... At the root of our restlessness lies a distorted conception of ourselves as immortal beings. ... Man sees himself in the mirror of immortality. Hence his desires, dreams, ambitions and visions assume absolute significance, and any frustrating experience may break man. When one frees himself from this obsession, his perspective becomes coherent and his suffering bearable.”

While battling cancer, Rav Soloveitchik is not given the option of “abhorring death”; instead he finds a way to live in the valley of the shadow of death, and finds renewed inspiration to live from death itself.

Yom Kippur is when Jews visit with the Angel of Death. As we look forward to the coming year, we are uncertain what our fate will be; to emphasize this, we read the words of the “unetaneh tokeph” prayer: “who will live and who will die... who by water and who by fire, who by sword and who by beast, who by famine and who by thirst…” And at that very moment, we turn to death. Franz Rosenzweig[6] notes the kittel, the white coat worn on Yom Kippur is intended to be an imitation burial shroud, because the purpose of Yom Kippur is to have everyone roleplay their death[7]. There are times when you must turn to death before turning back to life.

When the book of death is open, one immediately understands what a privilege it is to be inscribed in the book of life.  Even so, to pursue life after reading from the book of death takes courage. There were Holocaust survivors who refused to have children in a world that could be filled with bitterness. (I knew one such person). Rashi says that the Biblical matriarch Sarah died from heartbreak after her son Isaac was nearly sacrificed at the Akeidah.

Abraham, Isaac’s father, is determined to take a different approach. Death prods him find greater fulfilment in life. He says to himself: “If my son had actually been slain, he would have died without children! I must marry him off….”[8].  And this is the lesson of the death theme of Yom Kippur: remember the inevitability of death, and grab hold of what you have left to do in life[9].

I must make it clear that this is very different than having a “bucket list”, where you write up a list of 101 things to do before you die, and try to experience them all. Most of these lists include activities like bungee jumping, visiting the Galapagos, and drinking a rare vintage wine; these are what you must do “before you die”. Like many pop culture ideas, a serious existential insight is transformed into an instagrammable vacation.

An authentic confrontation with death is different. When people learn that they are going to die, they think of the people they love, and try to find ways to protect them and embrace them. I remember a man of 60 who received a negative prognosis telling me: “I don’t worry about my death for myself; I worry how it will affect my children”. People with a grim prognosis don’t run away on vacation, they go home to embrace their loved ones.  Turning to death changes your priorities.

The story of 21 year old Haim Sabato is very much a Yom Kippur story. After the war, he continues to hold on to his faith, and becomes one of Israel’s leading Rabbis and authors. Adjusting Sights has brought enormous comfort to many other soldiers who left beloved friends behind on the battlefield. And that is the point of Yom Kippur; it teaches all of us that we must muster up Abraham’s courage and push on when facing our mortality. It teaches the broken hearted to have the courage to marry, to have babies, and build communities, even after they have read too many chapters in the book of death. Yes, we must find a way to savor life, to turn to life, to love life, and then to love it even more because we know how short it is.

May we all be inscribed in the book of life, and may we all love it even more this year.

[1] Prisha, Yoreh Deah 378 והטעם כי האבל דואג ונאנח על מתו ואינו חושש לאכול……. על כן צוהו לאכול משל אחרים
[2] Halakhic Man, pages 30-39
[3] Boston, Bombs And Lessons From Israel: NPR,April 21, 2013
[4] Living with Terror, not Living in Terror: The Impact of Chronic Terrorism on Israeli Society, by Dov Waxman, Perspectives on Terror 5:5, 2011
[5] Rabbi Joseph B. Soloveitchik, Out of the Whirlwind, page 131ff
[6] The Star of Redemption, Franz Rosenzweig, University of Wisconsin, 345ff. A similar argument, to justify eulogies during Kol Nidrei, is made R. Yitzchak Weiss in Responsa Siach Yitzchak 305.
[7] Fasting and the other abstentions could also be seen as part of this theme as well.
[8] Rashi, Genesis 22:20
[9] Much like the Rashi about Abraham, Yom Kippur was traditionally a day of matchmaking. Facing death is a reminder to embrace life more firmly.