Before You is a Blessing and a Curse: Responding to Pittsburgh 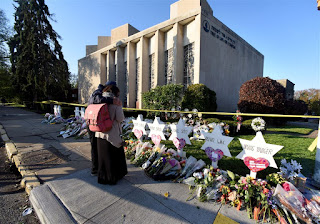 For the past week, the following verse has kept appearing in my mind:

Moses offers the desert generation, (the first to enter Israel), two paths, one of blessing and one of curse. Their task is to make the right choice, and choose the path of blessing.

It’s a meaningful lesson, if the choice is yours. But what happens if you find yourself on the cursed path anyway? What happens if the curses surround you, even though you didn’t choose them?

This past week was a cursed week.

On Saturday night I spoke to Rabbi Chuck Diamond, the former Rabbi of the Tree of Life Synagogue in Pittsburgh. Because the names were not yet public, he could only describe to me the people who were murdered.  And when he started to describe Cecil and David Rosenthal, his voice started to crack.


These were two developmentally disabled men, who since childhood had been brought by their grandfather to synagogue; and the synagogue was their home. They would greet all visitors and make everyone else feel at home in the synagogue as well.


And they were murdered while praying in their adopted home.

This is a curse.

Choosing the path of blessing is important; but how to navigate through the curses is even more important. Today, I’d like to share three lessons about the cursed path.

The first lesson is to recognize that a curse is a curse. Rabbi Jeremy Pappas overheard a young boy ask his mother in front of the Tree of Life synagogue say:  “Mommy, so this is where the people were killed just because they went to shul?” This murder was an act of anti-Semitism, and it should shock us as much as it shocks this child.

Anti-Semitism cannot be explained. It has been around since the times of Haman, and it has persisted in multiple forms: religious, racial, political, from the right and the left, from the illiterate and the highly educated. It makes contradictory claims, that the Jews are exploitative capitalists and revolutionary communists, that Jews love minorities too much and train police in methods of police brutality against minorities. The world’s longest hatred is an irrational fury looking for a convenient outlet; and that outlet is the Jews. So let’s call anti-Semitism what it is: a curse.

Why do I need to point this out? Because it is easy to let discussions of anti-Semitism and racism be subordinated to politics, used as wedges or dismissed as polemics. That is precisely the wrong discussion to have. We first need to remember that hatred is a curse. Like so many things that go without saying but still need to be said, hatred against any group is wrong and despicable. Bigotry, racism, xenophobia are dangerous, disgusting and immoral. Period.

Lisa said to me the other night that in a moment like this we need to be furious. We cannot talk about anti-Semitism and bigotry like anything else, because it is a monstrosity.  The idealistic among us want us to heal; but that is not enough. We must howl in anger, and let everyone know we cannot tolerate hatred.

Actually, we must take this lesson one step further. It is almost instinctual for Jews to dismiss everyday anti-Semitism as just an annoyance, something to be endured. But that is a mortal mistake, because anti-Semitism is a matter of life and death.

In Montreal, my previous synagogue had an anti-Semitic attack with some broken windows and graffiti. My initial reaction was to clean up the glass and forget it happened, but then I stopped to reflect for moment. The perpetrators had broken this window did so because they hate Jews; they hate me, they hate my wife, they hate my children and they hate my community. At the time my kids were considerably younger, and I shuddered to think of what these perpetrators would do if they found one of my children alone in a dark alley. What would the stonethrowers do as their next step? Tragically, we saw in Pittsburgh what happens when stonethrowers take the next step.

At the same time, there is another lesson: to look at the curse, and appreciate our blessings. The Pittsburgh massacre shocks precisely because this is America.

I had friend who was a Holocaust survivor who had one question for any Rabbi he met: do you know what happened in Kielce? Most Rabbis wouldn’t know, and so he would say, “I can’t learn from a Rabbi who doesn’t know anything.”

The answer is that the Kielce Pogrom took place in the city of Kielce, Poland on July 4, 1946. Polish soldiers, police officers, and civilians murdered 42 Jews after allegations that the Jews had kidnapped a child. (The child had actually gotten lost in the woods, and already returned home).

From time to time someone tells me that they won’t travel on a mission to Poland because the “ground is drenched with Jewish blood”. However, by that standard,  you can’t go anywhere in Europe. Are you traveling to England? There was a massacre in York (New York’s namesake) on March 17, 1190 (Shabbat HaGadol), in which 150 Jews were trapped in a tower, murdered and burnt to death. France? The Crusades. Spain? The Inquisition. Poland and Ukraine? Cossack massacres. Russia? Pogroms including the Kishinev pogrom of 1903, where 49 were killed. Germany? Holocaust. There is no shortage of tragedy in European Jewish History. But the US is different.

When considering the worst anti-Semitic attack in American History, we must also reflect on what a remarkable country this has been for the Jews. The United States is the first modern country Jews have been able to call home from the very beginning. In the first year of his presidency, George Washington wrote a letter to Touro Synagogue asserting that Jews would be fully accepted as equal citizens, and that “...the Government of the United States, which gives to bigotry no sanction, to persecution no assistance, requires only that they who live under its protection should demean themselves as good citizens....”


The unique culture of American democracy was called by the great Rabbinic authority Rabbi Moshe Feinstein a  חסד של מלכות, “a government of kindness”. This kindness was greatly appreciated by people like my mother, a Holocaust survivor, who recognized upon landing on these shores that this would finally be a place she could call home. Even when we struggle with the cursed attack in Pittsburgh, we cannot forget that America is a blessing to be cherished.

There is a third lesson as well: how to navigate from the path of curse to the path of blessing. There are no good explanations for why bad things happen to good people, and there never can be any explanation. Rabbi Joseph B. Soloveitchik says that the only question to be asked is: How do I respond to tragedy? Our obligation in the face of a catastrophe is to act, to comfort and aid those who have suffered.

It is important to note that this response need not be heroic. You don’t need to save the entire world, you just need to respond. There is a insightful saying from the Baal Shem Tov, the founder of the Hasidic movement:

The meaning of this lesson is that even the smallest gestures have a big impact. You don’t need to light a bonfire yourself to push away darkness, because even a small candle will help; and 100 candles together will do even more.

In the last week, so many have brought a little bit of light into the world.  Colleagues at synagogues have been getting flowers left on their front steps with notes of sympathy; I myself got an email from someone in Rangarajapuram, India who wrote: “Its very sad to witness the innocent Jewish brethren are killed. We pray never such thing happen in the future.”  A colleague who was going to one of the funerals in Pittsburgh had a very tight plane connection; when the staff on the plane heard what he was doing, they radioed the plane flying to Pittsburgh to wait so he could make it to the funeral. The Pittsburgh Gazette had a banner headline in Hebrew with the words of the Kaddish, and NBC Nightly News followed suit by ending the program with the words of the Kaddish, while photos of the victims were displayed on screen. It feels as if the entire United States is mourning with the Jewish community, and we are not alone.

In the Jewish community, there has been courage and compassion. Rabbi Jeffrey Myers of the Tree of Life Synagogue told an interviewer that "we are Tree of Life, and as I said before to many, you can cut off some of the branches from our tree, but Tree of Life has been in Pittsburgh for 154 years. We're not going anywhere and…..we will be back stronger and better than ever.". A Ramaz alumnus studying in Pittsburgh, Effie Landau, wrote me about this Shabbat in Pittsburgh, the first since the murder:  “ I’m looking forward to it - Chabad and Hillel finally are joining up and tons of Jews are popping up we never knew about and we’re expecting over 500 people at Shabbat dinner for students in Pittsburgh!”.

This is how one navigates from a curse to a blessing. We need to stand up with determination, kindness and unity. We need to light as many candles as we can, because the world can be a very dark place. And if we do so, we will find our way back to the road of blessing.