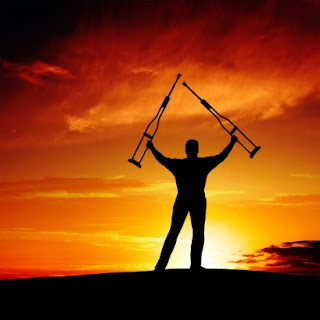 I was just about to settle in to my seat on the C train when the train lurched violently. Instead of resting myself comfortably on the seat, the back of my left thigh slammed into the hard edge of the chair. This impact caused  a 7-inch spiral fracture of my femur, a break so long and large, that when I shifted positions the broken edges of the bone made a cracking sound when rubbing against each other. I asked the people on the car to tell the conductor to stop the train, and to call EMS. Help was slow in arriving, and by the time they got me off the train it was nearly an hour since the accident had occurred.

Lying face down on the subway floor is the very portrait of human frailty. From one unexpected blow, I was reduced to a helpless puddle of flesh and blood, lucky to be alive.

Helplessness is a profoundly dehumanizing feeling. Rav Soloveitchik writes that human dignity is based on our capacity to master our environment. When our sense of control is taken away, we are diminished; and when lying face down in the subway, you resemble a piece of broken pottery more than a majestic being created in the image of God.

At that moment I felt an extreme loneliness. The Bible emphasizes that to suffer alone is the greatest torment. To be on the floor of the subway and to know noone, and not know if anyone will help, made my first few moments after the accident particularly frightening. It is for this reason that the obligation of Bikur Cholim, (visiting the sick), was established; to make sure that those who are ill get the support they need both physically and emotionally. No one should ever suffer alone.

I was fortunate enough to have so many who came forward to raise me up. A young man on the subway, Aleh, called my assistant Dina Farhi, who coordinated all the next steps. Rabbi Meyer Laniado came to the Columbus Circle station to lend his support. Multiple friends helped manage my medical care, made our apartment handicapped accessible, sent over refreshments and offered messages of encouragement. (I was also lucky to have had the foresight to marry Lisa 26 years ago; she has been at my side 24/7.) I might have fallen low, but so many came to raise me up.

During my first few days in the hospital, what shocked me is how ignorant I had been all my life. I had visited hospitals hundreds of times and listened to people describe their pain. But I never understood what they were going through, until I myself experienced the extreme agony of being absorbed in my own pain to the exclusion of everything else. In addition, I now have temporarily lost the use of a leg, and need a walker to move around, and help to do nearly everything else. Here too my ignorance shocked me; I have many disabled friends, but I never realized what a heroic effort they need to make to take care of their basic needs. I got renewed inspiration from these friends, who meet each day with courage and determination despite disabilities and hardships.

When I was riding in the ambulance to the hospital, George, the paramedic, shared a story he thought would resonate with me as a rabbi. He once had a call to aid a 96 year old man who was in great pain. George said to the elderly man: “this is probably the worst day of your life, right?”. The man looked at George and said: “no. The worst day of my life was when I was in Birkenau”. The elderly man went on to describe memories of his most horrific day at the camp. I told George that this story touched me because my mother had also been in Birkenau. At that moment I realized that whatever pain I was experiencing, it did not in any way compare to what my mother, and so many others like her, had to endure. Once again, I was not alone; I was surrounded by inspirational role models, true heroes who have met the worst in life with courage and determination. They continue to give me encouragement and hope.

Thank God, even at the lowest moment of my life, a group of strangers, friends, and role models have lifted me up. I am now on my way to recovery, and I hope to see you in KJ soon.


Posted by Rabbi Chaim Steinmetz at 2:15 PM No comments: