Moshe's Leadership, the Rebbe, and the Dilemma of the Modern Jew 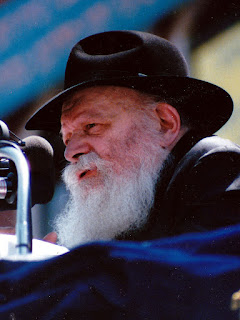 This week’s Torah reading contains an exceptionally puzzling passage. We are told about the complaints of the Jews, who are thirsty and worried. Moshe and Aharon are told by God to

“...take the rod and assemble the community, and before their very eyes order the rock to yield its water.” Moshe hit the rock twice, and it gave forth a copious amount of water.

Immediately after this miracle, God says to Moshe:” Because you have not believed in Me, to sanctify Me in the eyes of the children of Israel, therefore you will not bring this assembly into the land which I have given them.”

What did Moshe do wrong? This passage challenges every interpreter. Don Isaac Abravanel mentions eleven interpretations of this passage. And there are yet more. One opinion he cites says perhaps Moshe didn’t sin at all, and the Torah is blaming Moshe for the sins of the people. A clear explanation remains elusive.

Rashi offers one of the stranger explanations. He says Moshe’s sin was hitting the rock after he had been specifically commanded to speak to the rock. Rashi says: “For had you spoken to the rock and it had given forth [water], I would have been sanctified in the eyes of the congregation. They would have said, ‘If this rock, which neither speaks nor hears, and does not require sustenance, fulfills the word of the Omnipresent, how much more should we!’”

Rashi’s explanation seems more puzzling than the passage itself! The Ramban points out that God had asked Moshe to carry his stick to the rock; wouldn’t that imply he was supposed to hit the rock? In addition, considering that the rock is an inanimate object, what difference does it make if he speaks to the rock or hits it?

When you consider the wider context, Rashi’s explanation is even more perplexing. In a prior section of the Torah (Exodus 17:5-6), Moshe is commanded to produce water for the congregation by hitting a rock! Why would this time be different?

Perhaps the best way to read Rashi is to see this as an allegory on leadership. Moshe’s audience is not the rock; it is the people. Whether he hits the rock or speaks to it tells us everything about how he will lead the people.

Leaders use different tools to influence their followers, and those methods run on a continuum from coercion to persuasion. Warm words are used to persuade, while a swinging stick is used to coerce. A leader must adjust his methods according to the audience: for certain audiences one needs to carry a big stick, and for others, it is critical to speak softly.

In Moshe’s early career, he had to be a leader who carried a big stick. When Moshe initially refuses to lead, he says it is because he is “not a man of words.” The Midrash (Shemot Rabbah 3:14) explains that God responds to Moshe that he doesn’t need to speak. In dealing with a dictator like Pharaoh, a man accustomed to the master-slave view of politics, all Moshe needs is a big stick. Pharaoh is not open to persuasion and will only respond to brute force.

Even Moshe’s leadership of the Jews after leaving Egypt is based on brute force. As former slaves, they respond best to strength and coercion. Similarly, at Mount Sinai, the Talmud says the Jews accept the Torah under duress (Shabbat 88a).

In this context, we can understand why in the Book of Exodus, during the first year in the desert, Moshe is commanded to hit the rock. Moshe must lead a reluctant assembly of former slaves, a people who only know how to respond to coercion; leadership for them requires a powerful show of force.

But the event at Mei Merivah takes place in the 40th year. This is a new generation, born free in the desert. They too must follow; but this is not the time for coercion. Here, a new generation must be convinced to be self-reliant and strong, and that can only be accomplished with persuasion and education.

Rashi incisively leads us to the core of the Mei Merivah issue. In the 40th year in the desert, big stick leadership will diminish the second generation’s ability to hear God’s voice.

Moshe’s sin is nearly imperceptible from the text, because it is unique to his situation. As a leader overseeing generational change, he was expected to understand that some generations require the big stick, while others require soft words.  And because Moshe cannot pivot to the leadership of speaking softly, another leader must bring the second generation into Eretz Yisrael.

For the last 200 years, Orthodox Jewry has been trying its best to adapt to a new reality. In the medieval era, certain judicial rights were granted to the leadership of the community, and Jewish leadership within the ghetto could certainly pressure and coerce their members into observance. But after the Emancipation gave political rights to the Jews in Western Europe, the ghetto walls came tumbling down, and the position of Orthodoxy diminished.

Many recognized that political rights would change the religious landscape. As Napoleon was marching towards Russia, the rabbis of Russia debated whether they should pray for him to defeat the hated czar, Alexander I. Rabbi Shneur Zalman of Liadi, the first Rebbe of Chabad, said that he was praying for the czar to be victorious. He explained that he had seen a vision of the future on Rosh Hashanah, and “was shown that if Bonaparte is victorious, the wealth of the Jewish people will be increased and the dignity of Israel will be restored. The hearts of Israel, however, will become more distant from their father in heaven…” It would be difficult to lead the Jews into a new world and persuade them to follow in the ways of their ancestors.

Generations later, all Jews would be liberated, and grow more distant from heaven. But the Seventh Lubavitcher Rebbe, Rabbi Menachem Mendel Schneerson, who passed away 27 years ago this week, was one who understood better than anyone how to adapt the message of Torah to the modern world; and he did so brilliantly, using down-to-earth lessons from baseball and profound insights from physics. He understood that a new vocabulary needed to be used, and that every Jew needed to learn how to reach out to others. Rabbi Joseph Telushkin, in his biography of the Rebbe, begins with a chapter entitled “A Rebbe for the New World,” a description that recognizes how difficult it is to teach ancient wisdom to a very different generation of Jews. And the Rebbe recognized his mission encompassed all of humanity. In one of the more powerful stories in the book, Telushkin tells of advice the Rebbe gave to Shirley Chisolm, the newly elected congresswoman from his district. As Telushkin explains, Chisholm was “the first black woman elected to Congress…. (she) lacked the power to stop senior and influential southern democratic congressmen, many of whom in those days were racists, from assigning her to the agriculture committee, an intentionally absurd appointment for a representative from Brooklyn…. Chisholm, who wanted to work on education and labor issues, was both frustrated and furious. She soon received a phone call from the office of one of her constituents, “The Lubavitcher Rebbe would like to meet with you.” ... Chisholm came to 770. The Rebbe said: “I know you're very upset.” Chisholm acknowledged being upset and insulted. “What should I do?” The Rebbe said: “What a blessing God has given you. This country has so much surplus food, and there are so many hungry people and you can use this gift that God's given you to feed hungry people. Find a creative way to do it.” And so she did. Together with farming state sponsors, Chisholm would introduce the Special Supplemental Nutrition Program for Women, Infants, and Children (WIC), which would feed millions of people.

This is just one example of how the Rebbe’s persuasive leadership would be transformative for Jews and non-Jews alike. Remarkably, a new generation in the new world could still follow a Rebbe, because they were ready for a different kind of leadership.