It’s Time for the Anti-Selfie 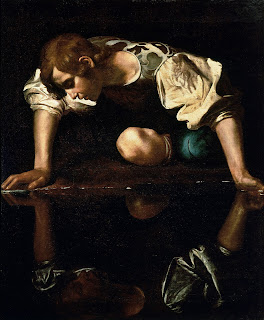 The selfie has an elevated pedigree. For much of history, people did not have the ability to look carefully at their own image. One could see their reflections in water or on polished piece of metal or stone, but those reflections were imperfect and offered only a partial glimpse of what the person truly looked like.

The mass production of the mirror at the beginning of the fifteenth century revolutionized how people saw themselves. In “Millennium: From Religion to Revolution: How Civilization Has Changed Over a Thousand Years,” Ian Mortimer explains that the mirror played a critical role in the Renaissance and enabled people to recognize their own individuality. This new appreciation for one’s unique appearance impacted the world of art, which shifted its focus from religious scenes to portraits, often commissioned by the painting’s subject. By the mid-fifteenth century, the mirror gave rise to the self-portrait, which was adopted by distinguished artists like Albrecht Durer, Jan Van Eyck and Rembrandt. That first “selfie” was the expression of a budding appreciation for the individual.

Jewish practice was also impacted by the mirror. The first discussions about them in the Talmud relate to crude mirrors that were also blades used to trim unwanted hair; for this reason the Talmud prohibits its use on Shabbat. In the Middle Ages, some rabbis prohibited men from using mirrors because they were too feminine, an exotic item that only women would use for grooming.

But as the mirror became commonplace, Halacha saw it as a symbol of human dignity. People would cover the mirrors in a house of mourning. This, according to Rabbi Moshe Sofer, is because the mirror contains the reflection of man’s divine image; and the Talmud says that with death, this Divine image is “overturned,” and all humans are reminded of their failures and frailty. In the mirror we can see ourselves and appreciate how we are created in the image of God; but during the week of Shiva the mourners cover up their mirrors, a way of saying that their own dignity is diminished.

Looking at one’s reflection is nothing short of intoxicating. But that can lead to a situation where  that image starts to control us. In Greek mythology, Narcissus, a beautiful but arrogant young hunter who spurns the love of others, is cursed. One day he drinks from a pool of water and immediately falls in love with his own reflection, which he tries to hug and kiss. He remains frozen until death, in pursuit of his own reflection. The legend of Narcissus is an allegory about self-love; but it’s also an allegory about the dangers of substituting an image for reality. Ovid, when narrating this story, says to Narcissus, “this that holds your eyes is nothing save the image of yourself reflected back at you.” An image isn’t reality, and when we take the ideal image too seriously, it can destroy us.

Rabbinic literature offers its own meditation on the Narcissus myth in a story told about “the Nazir from the South.” Nazirites would make a vow of holiness to not drink wine, avoid contact with dead bodies and let their hair grow out (At the end of one’s term as a Nazir, one must shave off all of their hair in the Temple). The Nazir's long hair was meant to foster a sense of independence; Rabbi Samson Raphael Hirsch explains the long hair symbolizes being insulated from society. The Nazir is meant to tune out all the noise around him and take a mirror to their own soul.

Yet even this holy ritual became more about image than substance. King David’s son Absalom is a lifelong Nazir; yet he takes pride in his long flowing hair, which becomes a symbol of his arrogance and rebellion. The institution of being a Nazirite was corrupted by those entranced with the dashing image of the outsider.

It is in this context that Talmud tells the story of the Nazir from the South, whose entire goal is to cut off his hair. The Talmud recounts:

One time, a man who was a Nazirite came from the South (who) had beautiful eyes and was good looking, and the fringes of his hair were arranged in curls. (The High Priest said) to him, “My son, what made you decide to destroy this beautiful hair of yours by becoming a Nazirite (who would have to cut off his hair at the conclusion of his vow)?” (The Nazirite) said, “I was a shepherd for my father in my city, and I went to draw water from the spring, and I looked at my reflection in the water. My evil inclination quickly overcame me…(and) I said to myself, ‘Wicked one! Why do you pride yourself in a world that is not yours? Why are you proud of a body fated to be worms and maggots? I swear... that I shall shave (my hair) for the sake of Heaven.’”

This young man offers a sharp contrast to the ordinary Nazir. For him, cutting his hair off is an act of holiness; he refuses to be intoxicated by a self-image that will destroy his soul. Unlike Narcissus, the Nazir from the South looks beyond the beautiful image in the water and remembers that life is short, there are promises to keep, and there’s more to life than having perfect hair. The Nazir from the South steadfastly refuses to fall in love with his own image.

The contemporary selfie is no artistic self-portrait, no profound exploration of self; it is usually just a form of image management. Instagram stars faithfully photoshop their photos before posting, and ordinary people go to great lengths to get the perfect shot, sometimes endangering their lives in the process. These selfies deceive others and distort the lives of their subjects. Too often, people live for their selfies, making themselves miserable in order to project an image of being absolutely happy.

It is time for the anti-selfie. As a child, I loved “The Wizard of Oz.” At the end, when Dorothy and her friends visit the great wizard, they find a grand man on a large screen who has nothing to offer. But as they discover the actual man behind the curtain, this simple man becomes a wizard, helping all of them with their problems. This is the lesson of the anti-selfie: we are best pulling back on all the layers of fake imagery to see what the person truly is; even if that looks less impressive, authenticity is far more inspiring.

Rabbi David Bashevkin has written about the importance of embracing one’s failures and notes in his biography that he “has been rejected from several prestigious fellowships and awards.” This should be the motto of the anti-selfie. Our greatest self is when we are someone who is real, warts and all. Authenticity and vulnerability, failures and struggles don’t project a perfect image, but they certainly make one into a better person. And that is the lesson of the Nazir from the South: We need to stop perfecting our image and start perfecting our souls; we need to embrace the anti-selfie.

Thank you for your enlightening blog.
Sandra Rabinovitch