The Selfish Person's Guide to Love 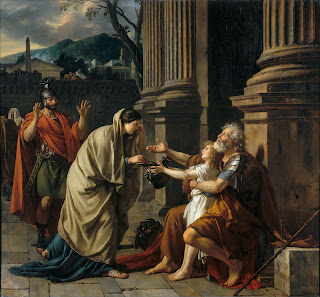 Self-interest has a bad moral reputation; it seems so ugly when compared to love. Self-interest is egotistical and materialistic, while love is beautiful enough that one can imagine a world built on love alone; as the Beatles put it: “All you need is love.” This negative reputation is undeserved, because self-interest is absolutely critical. The Talmud tells of a time when the Rabbis captured the evil inclination and society immediately fell apart. Desire and self-interest make the world a better place.

Sometimes idealists ignore their own interests; that too is a mistake. I had a friend in Montreal who constantly would tell me that “You need to take care of your mother's son” (i.e., myself). It was his way of pointing out that if there is a moral obligation to help others, it should be accompanied by a moral obligation to help yourself. The ethics of self-interest is a significant issue in Halakhah, and the subject of the following passage in the Talmud (Bava Metzia 62a):

Two people were walking on a desolate path and they had only one jug of water; if both drink from the jug, both will die, but if only one of them drinks, he will survive long enough to reach a settled area. Ben Petora taught: It is preferable that both of them drink and die, and let neither one of them see the death of the other. This was the accepted opinion until Rabbi Akiva came and taught that the verse states: “And your brother shall live with you,” indicating that your life takes precedence over the life of the other.

Rabbi Akiva and Ben Petora debate whether you are allowed to put your life before the lives of others. This question has long interested philosophers. Rabbi Saul Lieberman notes that a similar moral dilemma is posed by Cicero. But this Talmudic passage came to the forefront in the last century in a debate regarding the role of love in Jewish thought.

In 1910, Ahad Ha'am wrote an essay attacking the views of Claude Montefiore on love. Montefiore was a great-nephew of Moses Montefiore, and a renowned Jewish leader and scholar. Montefiore had just completed a commentary to the Gospels, in which he argued that the New Testament at times better expressed the essence of Judaism than the Talmud. Montefiore focused on the Christian ideal of love as one that kept to the “prophetic temperament.” Ahad Ha'am responded by attacking the very idea that love should be a society’s fundamental value; instead, he argues that justice is a more appropriate moral foundation. He points to this Talmudic passage in Bava Metzia, which instructs the person with the jug to drink the water, even though his companion will die. Ahad Ha’am explains Rabbi Akiva’s ruling as an imperative for people to take care of themselves first before caring for others. Ethics must be objective, and take into account what is good for everyone in equal measure. This, he explains, is why you are meant to love your neighbor as yourself. Even our love for others must not undermine our love for ourselves, and this love must ensure that both parties are treated with respect. (Ahad Ha’am adds that this is true of nations as well; to pursue peace should not require you to renounce your own existence.) Ahad Ha’am asserts that it is unethical to sacrifice yourself for others.

Ahad Ha’am’s view is both right and wrong at the same time. Yes, you can’t expect self-sacrifice from everyone. But one is permitted to be a hero. Rav Avraham Isaac Kook argues that even Rabbi Akiva would allow the owner of the jug to offer the water to their friend, so that the friend will live instead of them. Rabbi Akiva simply says: Don’t split the water and die together. The ruling is pragmatic, demanding that at least one person use this water to live. But, of course, a hero may choose to give his life to save the lives of others. Rav Kook’s view is more than an academic ruling; in the course of history, many a hero has chosen to sacrifice their own life for the sake of others.

Ahad Ha’am’s mistake is in failing to recognize that there are two levels of ethics. There is one of justice, which is based on the understanding that “What’s mine is mine and what's yours is yours” (Avot 5:10). Without this reasonable foundation, society would disintegrate. But there is a higher level of ethical standards, that of the “chasid,” the pious individuals, who will offer unreciprocated kindness and go beyond the letter of the law. They are the heroes who will hand the other person the last bottle of water, and jump on a grenade to protect their fellow soldiers.

Most of us are not at the level of the “chasid,” and struggle with love. We struggle precisely because of what Rabbi Akiva taught; we cannot expect an ordinary person to sacrifice themselves for others. God created humanity with an inborn self-interest, which is critical to ensure that we take care of ourselves. But at the same time, this self-interest makes it difficult to put others first.

But what if our egos could teach us how to love? This is not as absurd as it sounds. Rav Shimon Shkop, in the introduction to his Sha’arei Yosher, discusses our problem: We have a God-given instinct for self-love, and at the same time are commanded to love others. How can we reconcile these diametrically opposed demands? His solution is brilliant. He says that the commandment to love others is a command to redefine who we are. He writes that: The entire “I” of a coarse and lowly person is restricted only to his substance and body. Above him is someone who feels that his “I” is a synthesis of body and soul. And above him is someone who can include in his “I” all of his household and family. Someone who walks according to the way of the Torah, his “I” includes the whole Jewish people... And there are more levels in this of a person who is whole, who can connect his soul to feel that all of the world and worlds are his “I”, and he himself is only one small limb in all of creation. Then, his self-love helps him love ... all of creation.

This is how a selfish person can learn how to love; by seeing themselves as interconnected with everyone around them. For many of us, we experience this feeling with family. Rav Shimon Shkop reminds us that we can take this idea further, and embrace an even larger definition of what “I” means; we can learn to identify ourselves completely with the Jewish people, all of humanity, and even all living beings. This oceanic feeling that we are a part of a larger whole allows us to redefine ourselves, and redefine our self-interest.

Rav Aryeh Levin was known as the Tzadik of Jerusalem because of his exceptional compassion. There's an oft repeated anecdote about the day he took his wife to the doctor. When they entered into the doctor’s office, Rav Aryeh blurted out, “My wife's foot is hurting us.” Rav Aryeh’s total identification with his wife is inspiring, and to this day this anecdote is used by marriage instructors in Israeli yeshivot as the paradigm of what a good marriage is all about. But Rav Aryeh’s example goes beyond marriage, and is the perfect illustration of what love ought to be. Love is not about sacrificing yourself; it is about embracing others as a part of your own identity. Then, when you embrace others, offering devotion isn’t a sacrifice.

No man is an island, and the welfare of others is my welfare, as well. With this realization, even the most self-interested of people can learn how to love.

I want to say thanks to Ancient Dr Zuma Spell Temple for everything so far. To everyone who doesn’t believe in spell, I was one of those ones at first. I wasn’t quite sure if I wanted to do this since I’ve tried others so-called spells casters and they did not work and was a waste of my time and money. However, when I read through the testimonials of other people about his good work i decided to contacted him and after I talked Dr Zuma who answered all my questions and was very nice about everything, I decided to give it a try. I figured it would be my last try to get my guy back. So my story is that I was at my office when the guy I am in love with told me that he wasn’t in love with me and never will be and that he didn’t want to speak or see me again, especially since he was talking to this other girl. When I talked to Dr Zuma, he let me know which spells would be most appropriate for me and I chose the ones that was to get him back to me and stay with me and want to marry me. As soon as he started on the spells, my guy came back into my life! It was a miracle to me and I’m so thankful for that. Things have been going well, and pretty much according to what Dr Zuma said would happen. He’s always there when you need him and that’s also after the spell is done. I’m still waiting for the spells to completely manifest, but with all that has happened so far I’m very happy because i was already given up on myself before contacting Dr Zuma, if you asked me or my friends if I would have anticipated how things were right now…no one would believe it! Lara. To contact him spiritualherbalisthealing@gmail.com WhatsApp him +15068001647

Hi viewers, I'm posting this Because i found lots of people having marriage problems which I also experienced. I recently found help from a man called Dr. Oselumen he did a great job that made my man fell back in love with me again after ten months of separation. I want you to know there are fake online spell Dr .s if someone out there needs help, can email this great spell caster, droselumen@gmail. com check or connect with him on WhatsApp +2348054265852. He will give you the best result.
CONTACT HIM FOR ANY KIND OF HELP,MONEY SPELL,LOTTERY SPELL,PREGNANCY SPELL,DIVORCE SPELL,SPELL TO STOP COURT CASE AND WIN ANY COURT PROBLEM,DEATH SPELL,BUSINESS SPELL,HEALING SPELL,SPELL TO REMOVE BLACK MAGIC OUT FROM YOUR LIFE,FAMILY AND MARRIAGE PROBLEM.