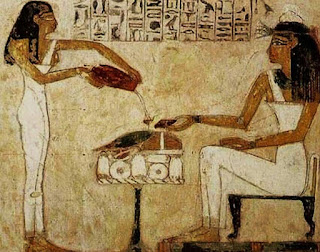 Rabbi Eliyahu Guttmacher (1796-1874) was the Tsadik of Grätz, a brilliant Talmudic scholar and mystic to whom thousands of Jews flocked for blessings and advice. A collection of kvitlach addressed to him are found in the archives of the YIVO Institute of Jewish Research. (Kvitlach are notes addressed to rabbis, with requests that the rabbi pray on behalf of the person or offer them a blessing.) Glenn Dynner, in his book Yankel's Tavern: Jews, Liquor, and Life in the Kingdom of Poland, cites several of these notes that relate to drinking problems that were destroying families. One note, from Solomon ben Reizel, includes the admission that he "drinks a lot of liquor to the point it makes him drunk, and because of this he has no domestic tranquility." He asked for a prayer that God "have mercy on him and guard him so that he doesn't drink anymore."  Another, from Isaac Eizik ben Rachel, describes how he "drinks more liquor than he needs, and so he beats his children, so he asks for a cure for this" from Rabbi Guttmacher. Problem drinking was not restricted to scattered individuals; a popular Mussar work from the late 1600s, Kav Hayashar, condemns those who drink early in the morning and show up to synagogue drunk.

At the same time, drinking was far less prevalent in the Polish Jewish community than in the surrounding population. Dynner quotes non-Jewish observers from 19th century Poland who write that “a Jewish drunk is hard to find” and that the “Jew is always sober.” This pattern continued on to the United States, where several studies from the 50s through 80s showed that Jews continued to have lower rates of alcoholism. There may be a genetic component to this, with the possibility that some Jews have an inborn aversion to drinking too much. However, this past advantage should not make us complacent; substance abuse and alcohol abuse is on the rise in the United States, and there is no reason to think that it is not on the rise in the Jewish community, as well. And more significantly, the myth that Jews don’t get drunk makes recovery far more difficult for Jewish alcoholics, who are afraid to reveal their condition because it makes them feel like they have failed the community.

Discussions about Judaism and drinking often focus on theories about why Jews drink less. Some argue that perhaps Jews learn to drink in moderation through the Shabbat Kiddush, which offers a ritual framework for the use of alcohol. (And Judaism, from the Bible onward, sees drinking in moderation as both respectable and enjoyable.). Another theory is that Jews see drinking as a defining difference between themselves and their non-Jewish neighbors. But there is really no evidence to back either view, and it is hard to know if any of these theories are valid. But one must look beyond sociology, and ask a different question: What is the Torah’s view of intoxication?

One of the attractions of drinking and drug use is the search for an alternate reality. The Midrash Tanchuma tells a story about a Torah scholar who is trying to convince his alcoholic father to change his ways. One day, the son sees a man drunk in the gutter; the Torah scholar hurries home to bring his father to witness the drunk’s humiliation, hoping it will change his father’s behavior. What is the father’s reaction? He asks the drunken man where he bought his wine! The son asks his father how he can continue to drink, when it is so obviously bad for him. And the father responds: “My son, in my life there is no greater pleasure, no greater Garden of Eden than this (drinking).” Intoxication offers the possibility of quick high, one that feels like ascending to heaven.

It is easy to confuse spirits with the spiritual. The very terminology of drinking overlaps with the religious, and drugs and alcohol are seen as a way to become “high.” In some religious cultures, like the Cult of Dionysus, intoxication becomes a spiritual experience.  And in ancient Hindu scripture, Soma, a mind-altering plant, is used to attain spiritual greatness.

In our Torah reading, a very different view of intoxication is offered. On the final day of the dedication ceremony for the new Sanctuary, Aharon’s sons, Nadav and Avihu, enter the Sanctuary and are struck dead. Their deaths are a mystery and it is unclear why they were struck dead.  The Midrash cites the opinion of Rabbi Yishmael, who notes that immediately after their deaths, the Torah commands “drink no wine or other intoxicant, you or your sons, when you enter the Tent of Meeting, that you may not die.” Rabbi Yishmael infers from this juxtaposition that Nadav and Avihu were drunk when they entered the Sanctuary, which is why they were struck dead.

This view is shocking.  Samuel David Luzzatto writes, “It is impossible to believe that Nadav and Avihu drank wine on the morning of that awesome day.” But there may be another interpretation of Rabbi Yishmael’s view. He could be saying that Aharon’s sons drank wine for ritual purposes. In Ancient Egypt, during the 2nd millennium BCE, there was a “Tekh Festival” or “Feast of Drunkenness,” whose ritual is described by one Egyptologist as this: "It seems that in the Hall of Drunkenness, worshippers got drunk, slept, and then were woken by drummers to commune with the goddess Mut.” Sacred drinking existed in ancient Egypt; perhaps the sons of Aharon found that to be appealing, as well. Intoxication, with its ability to alter one’s mind, can be misunderstood as a pathway to the spiritual.

Rabbi Yishmael’s interpretation offers us a powerful lesson: Inspiration is never found through intoxication. We do not find a higher purpose by trying to escape reality, and drinking wine is not the road to spirituality. (It should be noted that although wine is used for Kiddush, it can be replaced with challah or grape juice. We use wine in Kiddush due to its social significance, because it is a beverage that is appropriate to offer to an honored guest.) The Talmud extends this lesson and forbids one to pray after drinking just a few ounces of wine. Intoxication is a false form of inspiration.

Peak performance in Judaism needs no enhancement; on the contrary, when you alter reality, you lose the clarity of mind needed to find true inspiration. As painful as life may be at times, salvation is not found in an alternative reality.  And even when carrying a difficult emotional load, inspiration can be found by turning back to life.

When I have given sermons on drinking in the past, people would approach me afterwards and say: “My name is xx xx, and I’m an alcoholic.” These people inspire me; they have taken the long road to recovery, despite the pain and difficulty involved. Recovery is about recognizing that life is more satisfying than any drug, and a sense of purpose is more meaningful than any pleasure. And that is the lesson of this passage in the Torah.

Happiness is not found in a wine bottle or a pill container; true inspiration can only come from within.  This lesson is fundamental to recovery, but it is a valuable lesson for anyone seeking a meaningful life.

Posted by Rabbi Chaim Steinmetz at 9:36 AM