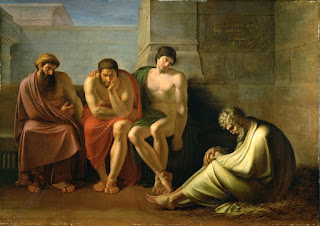 Rabbi Harold Kushner was a successful suburban rabbi when his three-year-old son, Aaron, was diagnosed with progeria syndrome, a disease that leads to premature aging. This meant that Aaron wouldn't live past his teens, and Aaron died in 1977 at age 14. Four years after Aaron’s death, Kushner published the international best seller When Bad Things Happen to Good People, and went on to become an author and lecturer whose wisdom touched millions of people around the world.

During an interview in 2012 he was asked to imagine what might have been had his son not gotten sick. Kushner rephrased the question:

Would I have rather had a normal child, and ended up being a mediocre rabbi who never had a book published in his life?…

Yes, I would go for that in a moment.

I want to reflect on this question for a moment. Let’s put aside the morally unthinkable suggestion of sacrificing a son for any form of success. But what about suffering?

Should we embrace it as beneficial to spiritual growth?

There is no question that our sorrows and hardships are a springboard for personal transformation. Professors Richard Tedeschi and Lawrence Calhoun coined the term “post-traumatic growth” after observing that many of their trauma patients had reinvented themselves in the aftermath of a major tragedy. They had grown in terms of their strength of character, relationships with others, perspective on life, appreciation for life, and spirituality. When Rabbi Kushner made this remark, he was well aware that his son’s illness and death had made him into a better person and a better rabbi. And that is why he felt it important to make explicit the awful thought that sat at the back of everyone's mind: maybe this horrible tragedy had turned out to be a good thing for him.

We are, perhaps, too comfortable with suffering because of the role it plays in Jewish thought. The Talmud speaks of “afflictions of love” -- that God brings suffering upon innocent, righteous people to help them achieve greatness. And the concept of a nisayon, a trial and test of one’s spirit, is found in the Bible, and the test itself makes one into a better person. Rabbi Samson Raphael Hirsch notes that the Hebrew word for nisayon is the same as the Hebrew word for raise up (nissa), because a test raises you up. The bitterness of suffering is itself the silver lining that carries untold blessings.

There is a practice that we perform each year at the Seder that reflects the positive side of suffering. In our Torah reading we are introduced to the Seder rituals of the Korban Pesach (Passover Sacrifice), Matzah and Maror (bitter herbs). The Maror represents the bitterness of slavery, while the Matzah and Korban Pesach commemorate freedom and redemption. The Talmud tells us that Hillel would wrap the Pesach, Matzah and Maror together, something we call Korech. At first this seems extremely strange; why would we wrap the symbols of freedom and slavery together? The Sefat Emet explains that Korech offers recognition to the reality that the bitterness of slavery became foundation for a future Jewish identity. Seen this way, the Maror, the experience of slavery, is actually a positive and an important stage in the spiritual growth of the Jewish people.

But the other rabbis in the Talmud dispute Hillel’s view. Some medieval commentaries interpret the rabbis as saying that Matzah and Maror must always stay apart and remain distinct rituals.

I believe this second view carries with it an important message: we must never romanticize suffering. When we speak too easily about suffering being an agent of self-improvement, we forget that our priority is to prevent suffering in the first place. Our obligation is to see death and distress as our enemies, an irreconcilable evil that we can never accept. Rabbi Joseph B. Soloveitchik emphasizes the fact that mourners are required to tear one’s garments, sit on the floor, abjure all joy, and only focus on their grief. This makes clear what the Halakhic response to suffering is: we don’t accept it, don’t feel comfortable with it, and don’t see it as good in any way. Rabbi Soloveitchik writes that one must never acquiesce to evil, make peace with it, or condone its existence. This is the polar opposite of the Korech point of view; the bitter herbs of suffering should never take a place of honor, and belong far away from symbols of joy.

It is our ethical responsibility to battle the Angel of Death, and stop the spread of death and destruction. This can be done even in the aftermath of a tragedy. When Rabbi Kushner looked back on his book years later, he explained that he wrote it to redeem the memory of his son. In a preface he added to the second edition, Kushner writes that he was proud of the fact that I have told the world the story of Aaron's life and death…... it is apparently the fear of many terminally ill children that when they die, they will be forgotten because their lives were too short... to be worth remembering. We had to reassure Aaron that his life was too precious for us ever to forget. I wrote this book in part to keep a promise to my son. Writing When Bad Things Happen to Good People was part of his battle with the Angel of Death.

Occasionally, a sermon or an article gets sent to me about the virtues of coronavirus and the concomitant post-traumatic growth, as if the coronavirus was a sort of spiritual cosmetic surgery, painful, but worthwhile. These sermons often have authors who've never experienced suffering themselves; people who have suffered don’t talk this way. I find these articles to be disturbing. Yes, there is post-traumatic growth.  Yes, there is an obligation to respond to evil with goodness, but one must never, ever, make believe that Maror tastes sweet.