Blaming Other Jews for Anti-Semitism 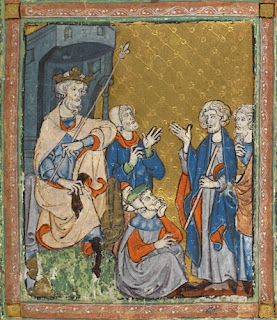 Would the first Pharaoh who initiated slavery have been an anti-Semite? At first, he seems like an ordinary xenophobe, hoping to abuse and enslave a group of immigrants. But then a different type of hatred sets in; the Egyptians are “sickened” by the Jews. Rabbi Samson Raphael Hirsch argues this goes beyond even ordinary anti-Semitism. The Egyptians didn’t only hate the Jews, they couldn't tolerate their very existence; if an Egyptian saw a Jew, it would ruin their entire day. Anti-semitism begins here.

Pharaoh remains an inspiration for later anti-Semites. The Egyptian priest, Manetho, who lived in the 3rd century BCE, depicts the Jews as savage, treasonous lepers who were ejected from Egypt because of the harm they did. This slander is repeated by others in the Greco-Roman world, including the historian, Tacitus. One can safely say that Pharaoh was an anti-Semite if he inspires other anti-Semites.

Jews have never forgotten the hatred of Pharaoh. In the Survivor’s Haggadah, which was written in a Munich displaced person’s camp by Yosef Dov Sheinson, and illustrated by him and Miklos Adler, the horrors of slavery in Egypt and the Holocaust are merged. One page of the Haggadah features the line, “We were slaves to Hitler in Germany.” Illustrations of a child being torn away from his mother, the smoke of the crematoria, and the slave labor all retell the Exodus story through the eyes of survivors. Each time the story of anti-Semitism adds a chapter, we remember where the world’s longest hatred began.

If Egypt is the beginning of anti-Semitism, it is also where an ugly aspect of Jewish history begins: Jews blaming other Jews for anti-Semitism.

The Talmud (Nedarim 64b) connects a series of episodes in Moses's life to two renegades, Datan and Aviram. They inform Pharaoh that Moshe killed an Egyptian taskmaster, and they bitterly rebuke Moses after his initial mission fails. They say to Moshe:

May the LORD look upon you and punish you for making us loathsome to Pharaoh and his courtiers—putting a sword in their hands to slay us.

In short, Datan and Aviram blame Moshe for Pharaoh’s reaction and preach loyalty to their Egyptian taskmasters. Moshe is blamed for Pharaoh's anti-Semitism.

The accusations of Datan and Aviram foreshadow some of the ugliest debates within the Jewish community throughout the years: Is the behavior of Jews responsible for anti-Semitism? In Germany in the late 1800s, multiple authors, including Hermann Cohen, argued that the Orthodox Jews, with their commitment to the Talmud, Jewish law, and Jewish nationalism, stoked the flames of anti-Semitism. They felt that the anti-Semites hated Jews because they were different, and that the “Jewish Problem” would be resolved once Jews let go of these “moldy” and unpleasant beliefs and practices. Some Orthodox Jews had a response of their own. They argued that the non-observance of the reformers actually caused anti-Semitism, both because it threatened the religious beliefs of other Germans, and because it caused religious Germans to lose respect for Reform Jews. Marcus Lehman, the editor of the Orthodox newspaper The Israelit, wrote in 1880:

These anti-Jewish movements should finally open the eyes of our Reform heroes and convince them that by seeking to imitate others and by casting off religious duties and ordinances we by no means gain the respect and love of the other peoples. On the contrary, they respect us only when, even under assured freedom, we cling to the Judaism that demands numerous sacrifices and imposes many an abstinence; and when, under full emancipation, we preserve the old well-known modesty. If we tread this path, the entire anti-Jewish movement will certainly cease and, undisturbed, we shall enjoy the blessings of a liberal age.

In short, members of both the Reform and Orthodox factions blamed each other for anti-Semitism. These assertions are built on the assumption that if only Jews could change, anti-Semites would stop hating us. But this loses sight of what the phenomenon of anti-Semitism is at its core: an incoherent, irrational, unconditional hatred. Pharaoh, despite enduring plague after plague, refuses to free the Jews. Millennia later, Hitler will divert sorely needed resources from his war effort, so he can continue to murder the Jews. Anti-Semitism is a hatred without reason, a fury without cause.

Datan and Aviram think Moshe is provoking Pharaoh’s hate. Sadly, Pharaoh’s hate continues unabated through the generations, no matter what Jews do or don’t do. Of course, Jews can criticize Jews; and there are many times when we must do so. Jews can and should debate with other Jews. But we must never rationalize anti-Semitism or protect anti-Semites, and we must never, ever blame Jews for anti-Semitism.