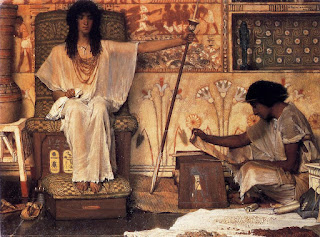 Should we apply today’s standards to the heroes of the past? Historians have debated this issue for the last century. Some subscribe to “presentism”, which the Oxford English Dictionary defines as “a bias towards the present or present-day attitudes, esp. in the interpretation of history.” Those who critique presentism dismiss it as offering politically driven anachronistic readings of history. Carefully nuanced debates regarding presentism are found in academic journals; but today, the debates of presentism are just as likely to be found in tabloid headlines, with angry clashes about the proper place of historical figures and public statues.

Presentism is always at issue when reading the Tanakh; already in the rabbinic period, there were attempts to read halakhic practice back into the actions of the Patriarchs, to make their behaviour conform with religious norms. Today, some readers take the opposite view, and assume the Biblical characters must be benighted and bigoted, incapable of offering anything relevant to say on contemporary issues.

This debate is critical for reading the end of this week’s parsha. In the final years of the famine in Egypt, the Egyptians beg Yoseph for food. Initially, they offer Yoseph their silver; once that runs out, Yoseph accepts their livestock, and then their property. Eventually, they offer themselves to Yoseph as slaves in return for food, and the entire population is moved to new homes, to work the fields as Pharaoh’s sharecroppers.

It is puzzling that Yoseph’s political policies are included in the Torah. This slice of ancient Egyptian history seems irrelevant to the ordinary reader of the Tanakh; why would the Torah include a lengthy passage with seemingly no connection to Jewish history?

Contemporary interpreters read this section as a silent rebuke of Yoseph; blinded by his loyalty to Pharaoh, he inadvertently establishes Egyptian slavery. These critics see Yoseph’s policies of economic centralization and state imposed slavery as setting the stage for enslaving the Jews. Moshe Pava focuses on the economic aspects of Yoseph’s policies; based on Friedman and Hayek, and he argues that Yoseph’s misuse of insider knowledge and his misguided economic policies led Egypt on the road to serfdom. Uriel Simon focuses on the ethical dimension, and sees Yoseph's advocacy of slavery as fundamentally unethical; he also criticizes Yoseph’s granting of special privileges to his family. Aaron Wildavsky and David Sabato offer interbiblical critiques of Yoseph. Wildavsky points out the contrast between Yoseph and Moshe; Yoseph builds the Egyptian empire and institutes slavery, while Moshe abolishes slavery and defeats the Egyptian empire. Among the points Sabato adds is that Yoseph’s actions run counter to the Torah’s emphasis that land should never be sold permanently, because all land belongs to God.

Yoseph’s policies are included in the Torah as a cautionary tale. He imagines he will protect his family by increasing Pharaoh’s power; the opposite results, and his policies pave the way for their future sorrow. Had Yoseph taken a more enlightened view of politics and economics, the Jews might have had a different experience in Egypt.

The classical commentaries to the Torah offer a contrasting view. The Ramban exemplifies this perspective when he writes “The Torah relates this…entire section in order to make known Yoseph's excellence in wisdom, in understanding, and in knowledge; and that he was a faithful man in that he brought all money into Pharaoh's house and did not accumulate for himself treasures of money and secret hiding places for wealth”. Other commentaries see Yoseph as protecting the ordinary Egyptian; Shmuel ben Chofni Gaon explains that the Egyptians were the initiators of all of these transactions, because they desired the protection of the state during a time of crisis, under the exceptional benevolence of Yoseph. Rashi offers a further motive for Yoseph’s actions. Yaakov and his children were newcomers, and would have ultimately been rejected by the general population; by moving all Egyptians from place to place, Yoseph hoped to help his family fit in.

These commentaries see Yoseph’s motivations as wholesome. He was loyal to Pharaoh, benevolent to the Egyptian people, and did his best to care for his family. If anything, by extolling Yoseph’s achievements, the text emphasizes the ingratitude of a future Pharaoh who will forget Yoseph’s contributions to the Egyptian empire.

For many years, I was attracted by the contemporary reading of this text. I dismissed interpretations that praised Yoseph’s economic policies as apologetics, a futile attempt to make a biblical hero look better. I only recently realized that my understanding of the text had been badly distorted by presentism. The commentators who lived in feudal societies and autocratic monarchies better understood what Yoseph’s actual situation was like, and they could walk a mile in Yoseph’s shoes. It is too easy to criticize Yoseph's decisions while sitting in the comfy confines of 20th century western democracy, without the spectre of famines, Pharaohs and prejudice. But Yoseph was living in a different era, and he had to make his decisions based on the political and economic realities of his time. His situation is not just different from our own; it is quite different from Moshe’s, who had the full power of divine authority behind him. Moshe can attempt to revolutionize the world, and introduce a new moral code. And even Moshe doesn't always succeed.

Both readings have an important role in understanding this text. We need to recognize both what was wrong about Yoseph’s situation, and what was right about Yoseph the leader. The very point of Moshe’s revolution is to improve the present, to pursue justice, uproot slavery and protect human dignity; it is not mere anachronism to recognize how we would do things differently today. At the same time, we should recognize how Yoseph’s actions were heroic, considering where he was and the situation he was in. Morally clear and morally compromised situations require distinct methods of moral leadership.

What should one do in Yoseph's situation? There are times when there are no perfect options, when the best one can do is far from ideal; in these cases, the right choice is to follow the advice of the Pirkei Avot: “It is not your duty to finish the work, but neither are you at liberty to neglect it.”. And that is what Yoseph did. He knew that Egypt had always been a moral quagmire, and would eventually become a house of slavery. But that did not exempt him from doing his best at that moment. He labored to insure stability and sustenance for all Egyptians, and a comfortable exile for the next three generations of his family.

There are good decisions that don't have good outcomes, and there are heroic choices that don’t elicit cheers. We cannot ignore that Yoseph was a hero in his generation; but the work doesn’t end there, and we must always continue to build a better world for future generations.

As always, a thoughtful, intelligent presentation of how to understand the past.

It is too easy to view the past through contemporary eyes. To view the past as if we were there (sound familiar?), can give a better sense of why any individual makes decisions, appropriate for the time. This is neither positive nor negative, it is just what IS. Understanding the context, can in and of itself, makes it applicable even to contemporary issues. It's the PROCESS of MAKING a decision that becomes important.