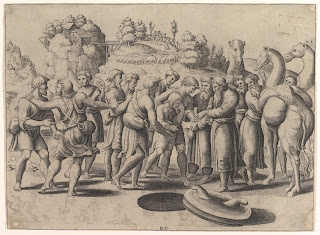 Parents didn't always worry about sibling rivalry. Peter Stearns of Carnegie Mellon University, in an article entitled “The Rise of Sibling Jealousy in the 20th Century,” argues that in the 19th century, adults showed little awareness of jealousy among their children. Stearns reviewed multiple books, articles and materials about child rearing written from the 1800s onward; and the topic of sibling rivalry only began to appear in the 1920s, when it suddenly became a significant focus of parenting experts. But this interest was short lived. By the 1960s, the pendulum had swung back in the other direction, with sibling rivalry being relegated to a few paragraphs in parenting manuals. (Now, there is almost as much space devoted to getting pets ready for the new child). Stearns sees several factors behind the explosion of concern about sibling rivalry in the mid-20th century. One factor was the shift in family structure from larger, multigenerational households to the nuclear family; and that nuclear family was having fewer children as well. Parental affection was now narrowly focused on fewer children, and those children vied with each other for the spotlight. More significant is that jealousy, the driving emotion of sibling rivalry, became a greater societal concern; the rise of larger bureaucratic organizations, corporate, social and governmental, required employees to work well together. Jealousy was seen as a character defect that prevents someone from being a functioning adult; if left unchecked, the jealous sibling might end up a failure, unable to work well with others. But prior to the 1920s, sibling rivalry was often overlooked; and Sigmund Freud, the father of modern psychology, focused primarily on the parent-child relationship as the crucible of personal development. Freud almost completely ignored sibling rivalry, seeing it as a trivial issue.

Sefer Bereishit takes a very different view on sibling rivalry, which is one of its primary themes. Puzzled by a verse in Shir HaShirim that describes the beauty of brotherly love, the Midrash asks: “When have we seen brothers love each other? Cain murders Abel... Yishmael hates Yitzchak... Esav hates Yaakov...and the brothers hate Yoseph”. The Midrash is correct; in Sefer Bereishit, brothers always hate each other. (And the one pair of sisters, Leah and Rachel, stand as hostile rivals to each other as well.) Failed sibling relationships stand at the center of Sefer Bereishit.

One of Freud's critics, Alfred Adler, emphasized the influence of siblings, and in particular, saw birth order as critical to personality development. Frank Sulloway, in his book Born to Rebel, utilizes birth order to explain the attitude of various intellectuals to scientific revolutions. Like Adler, Sulloway sees birth order as having a dramatic impact on personality, forcing each child to diversify their interests in order to find their own niche. Sulloway offers a portrait of firstborns as being conservatives and protectors of tradition, latter-borns as rebels and innovators, and middle-borns as being compromisers who bring people together.

Our Torah reading offers a very different depiction of the latter-born. Yoseph is the protector of tradition. He is the representative of his father, the one who informs his father of his brothers’ misdeeds, and the one sent to check on his brothers while they are away from home. To signify his unique status, Yoseph is given a special coat by his father. In some ways, the brothers attempt to murder Yoseph is actually a rebellion against their father Yaakov; it is Yaakov’s favorite Yoseph who stands ready to protect his father’s interests.

Most fascinating is the Torah’s depiction of sibling rivalry; it is only present in certain families, and is seen as the product of family and cultural dynamics. There is a difficult textual anomaly in the narrative about the sale of Yoseph; it is not at all clear to whom Yoseph was sold. In the text, the nationality of the buyers constantly changes; in different verses, they are called Ishmaelites, Midianites and Medanites. There are multiple theories to explain this discrepancy, but one of the more straightforward ones is offered by the Radak, Rabbi David Kimchi. He writes that Ishmaelites, Midianites and Medanites are interchangeable, because their ancestors Ishamel, Midian and Medan are all children of Avraham’s concubines; afterwards, the families of these half-brothers intermarried, and their clans became indistinguishable from each other. One can choose to call this group people either Ishmaelite, Midianite or Medanite, because they had become one united clan.

To a serious reader of the Tanakh, the Radak’s comment is unsatisfying. Why would the text be so sloppy, constantly switching the terminology it uses for the same group? Indeed, the constant switching appears to be intentional, as if the text is flagging this point for particular attention.

I believe that the switching signals a comparison. The Radak is correct that the clans of these half-brothers united as one; and that is precisely the point. Three clans, descendents of half- brothers have such a close relationship that you could use any name for them interchangeably! This offers an invidious comparison with Yaakov’s family; here, these brothers are ready to murder Yoseph. (It should be noted that the other time in the Tanakh where Ishmaelite and Midianite is used interchangeably, regarding Gideon, is also related to fratricide.) The Ishmaelites, Midianites and Medanites are examples of what brothers could be, and highlight exactly what Yoseph and his brothers are not.

But why is it that Yoseph and his brothers suffer from such terrible sibling rivalry while other brothers get along so well? Certainly, Yaakov does play a role. The Talmud says that “due to two sela of fine wool that Yaakov gave to Yoseph (i.e., the striped coat), his brothers became jealous of him and ultimately it ended up with our forefathers going in exile to Egypt.” But this dynamic goes beyond parental favoritism. The striped coat is more than just a coat; it is a symbol of a birthright. And Yoseph and his brothers have a birthright worth fighting over. While Ishmael, Midian and Medan are sent away from their father's home, Yoseph and his brothers know that their family has a unique destiny, a divine birthright, that each brother wants for himself. The blessing God gave Avraham's family has a dark side, because it comes with the curse of jealousy and envy. This is why since the days of Cain and Abel, brothers have fought over being God's chosen one.

Another possibility is that Ishmael and his half-brothers were all rejected. They had felt the sting of crisis and loss, and learned how critical it is to band together. When you expect something to be given to you by your parents, you are your brother’s competitor; when you start from nothing and need to find your own way in the world, your brother is your close companion. The Ishmaelites, Midianites and Medanites need each other, otherwise they will never succeed. But Yaakov’s sons are the chosen ones, and discord immediately follows. The sons of different mothers, they each adopt their mother’s grievances; they further divide by who is the son of a full wife and who is the son of a concubine. The situation is so tense, that if one immature son mentions his dreams of taking everything over, his brothers think seriously about murdering him. In our Parsha, sibling rivalry is the product of privilege.

The story of Yoseph and his brothers is not just about one family; it reflects concerns about the future of the Jewish people. How does a nation endowed with a unique destiny avoid killing each other over a divine birthright? One of the great lessons of Judaism is that without humility, without a sense of respect for those around you, family, community and nation will be torn apart. Ultimately the brothers will descend to Egypt, and learn that their enemies care little about their internal family squabbles. The Midrash explains it is in Egypt that we first see a set of brothers who love each other: Moshe and Aharon. (And even they don’t always get along.) It is in the desperation of slavery that the family of Yaakov learns how to be the Bnei Yisrael, the children of Israel.

Our unique destiny can exacerbate sibling rivalry; but our shared fate reminds us never to pull apart. Yoseph and his brothers are a cautionary tale for the Jewish future, to remind us that family comes first, and we cannot allow our greatest blessing to become our biggest curse.