Crisis and the Formation of Community: The Lessons of the Damascus Blood Libel 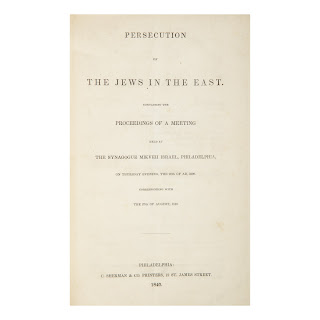 On February 5, 1840, the Capuchin Friar Thomas, an Italian who had long resided in Damascus, disappeared together with his Muslim servant Ibrahim ʿAmāra. The monk was known to have been involved in shady business, and the two men were probably murdered by tradesmen with whom Thomas had quarreled. Nonetheless, the Capuchins immediately circulated news that Jews had murdered both men in order to use their blood for Passover.

As Catholics in Syria were officially under French protection, the investigation was conducted by the French consul. But the consul, Ulysse de Ratti-Menton, allied himself with the accusers, and the investigation was conducted in a barbaric fashion. A barber, Solomon Negrin, was arbitrarily arrested and tortured until a "confession" was extorted from him. He was coerced to tell a tale in which the monk was killed in the house of David Harari by seven Jews. The men whom he named were subsequently arrested; two of them died under torture, and one of them converted to Islam in order to be spared.

This revival of the medieval blood libel sent shockwaves through the Jewish world. After multiple diplomatic interventions, a delegation of European Jews, whose members included Moses Montefiore, his secretary Louis Loewe, Adolphe Crémieux and Solomon Munk, liberated the prisoners on September 6th. This was a remarkable achievement for the European Jewish community, which had just received political rights in the prior 50 years.

But there is a significant American element to this story. The Damascus Blood Libel represents the first stirrings of communal engagement in the United States.

American Jewry got involved rather late. The news took a long time to travel across the ocean, and it took even longer for the American Jewish community to organize themselves.

Joseph Jacobs, who writes one of the first historical accounts of the American reaction in 1902 explains that “So far as I can ascertain, it took about 30 days for the European mails to reach America, yet it was not till Aug. 17, more than two months after the Board of Deputies (of British Jews) meeting in London, that a meeting was held in New York.”

This small, scattered group had never organized before. But at this moment they took action, holding meetings about the Damascus situation in six cities around the United States. In Philadelphia they were led by one of the remarkable figures of 19th century American Jewish history, Rabbi Isaac Leeser of the Mikveh Israel synagogue. (Leeser was the founder of the first American Jewish newspaper, the first American translation of the Siddur and Tanakh, and the Jewish Publication Society.)

The speeches and resolutions for this meeting were published as:

“Persecution of the Jews in the East, Containing the Proceedings of a Meeting Held at Mikveh Israel, Philadelphia, on Thursday Evening, the 28th of Ab, 5600, Corresponding with the 27th of August, 1840, C. SHERMAN & CO. PRINTERS, 19 ST. JAMES STREET.”

It is moving to read the resolutions. They demonstrate how this far flung Jewish community had not forgotten their brethren overseas, and at the same time, this growing young community was ready to unify and organize.

You can see their sense of solidarity with the Jewish world in three of the meeting’s resolutions, quoted below:

Resolved, That they experience the deepest emotions of sympathy for the sufferings endured by their fellows in faith at Damascus and Rhodes, under the tortures and injuries inflicted on them by merciless and savage persecutors...

Resolved , That they will cooperate with their brethren elsewhere in affording pecuniary aid, if required, to relieve the victims of this unholy persecution, and to unite in such other measures as may be devised to mitigate their sufferings.

Resolved , That this meeting highly appreciates the prompt and energetic measures adopted by our brethren in Europe, and elsewhere, for the promotion of the object of this meeting, and the noble undertaking of Monsieur Cremieux and Sir Moses Montefiore, in coming forward not only as the champions of the oppressed, but also as the defenders of the Jewish nation; and this meeting expresses the hope that the God of Israel will shield and protect them, and restore them to their families in the enjoyment of unimpaired health.

To summarize these resolutions, the Jews of Philadelphia express their love for their fellow Jews in Damascus, commit to fundraise for them, and to work with Jews around the world to release the imprisoned Jews.

Then there were additional resolutions worth noting as well.

Resolved, That we invite our brethren of Damascus to leave the land of persecution and torture, and to seek an asylum in this free and happy land, where all religions are alike tolerated—where every man is allowed to enjoy his own opinion—where industry prospers, and where integrity is sure to meet its just reward!

This resolution reminds us how proud American Jews were to be Americans. They were standing up for the Jews of Damascus not just as Jews, but as proud Americans; so proud, that they were inviting the Damascus Jews to join us here.

Another resolution deserves our attention as well:

This resolution tells the story of a new national initiative taking shape, with Jews around the country working together on a matter of mutual concern.

The letters sent from the 6 communities to President Van Buren received a very encouraging response. The Secretary of State, John Forsyth reported that the United states had already intervened on behalf of the Jews of Damascus. In addition, Forsyth in his letter recognizes that Jews are “some of the most worthy and patriotic of our own citizens”. For Jews to be considered valued citizens is something we take for granted now, but was not at all a given in 1840.

What does the American response to the Damascus Blood Libel represent? These petitions were too late to be effective; not only were negotiations for the release of the Jews close to their conclusion, but the United States government had intervened even before these petitions were sent.

But these meetings are significant because in 1840, American Jews  for the first time decided to work together for a mutual cause. Joseph Jacobs notes that  “it was not for naught that they had taken a worthy share in the universal protest of Israel….Their part in the Damascus affair was thus the beginning of the diplomatic or international phase in the history of the American Jews, and in this sense, I venture to think, deserves somewhat fuller attention than has hitherto been given” . The Damascus Blood libel transformed a scattered group of Jews, at a distance from the centers of Jewish life, to build a community.

This was a transformational moment, born out of a difficult crisis.

Sometimes it seems that Jewish unity is only possible when our community is in crisis.

Rabbi Joseph Soloveitchik describes this connection as a "covenant of fate";  our shared suffering as a people is what unites the diverse elements of our community, from the atheist to the ultra-Orthodox.

But I believe that the connection is far more profound. The Jews are called the children of Israel in the Bible. The Book of Genesis makes it clear that Jews don’t see themselves as an ordinary nation, but rather as a family writ large. We are still Israel’s children, and one large family, with all of our tribes and squabbles. I would not call it a covenant of fate; I would call it a covenant of family. Jewish unity goes beyond shared suffering; it is born in love, the love of a family.

Sometimes families drift apart, and forget to show their love; but in crisis they pull together. The Jewish people are much the same; we may forget about each other, but we are always there for each other in times of crisis.

I sat on a panel yesterday with Rabbi Angela Buchdahl and Rabbi David Wolpe. The panel was organized by JJ Sussman of Gesher, for a group of Israeli leaders.

The answers were all insightful and nuanced; but the questions were even more important. The beauty of this panel, and hundreds of others like it, is that we are searching. We want to find a way to connect with each other even when this virus keeps us apart.

In one of the most beautiful verses of the Bible, when Joseph is on a mission to find his brother, he is asked by a stranger what he is doing. Joseph’s answer is:

I am searching for my brothers.

There could be no better description for what the Jewish world is doing right now. We are searching for ways to connect, ways to support, and ways to help our brothers and sisters around the world.

When it's a crisis, you need to be there for your family.