The Jerusalem of the Simple Jew

How do you tell the story of the Kotel to people who haven’t been there before?

Two years ago I was part of a Mega Mission from Montreal that brought nearly 600 people to Israel, including 150 who had never been there before. As we arrived to the Kotel on the second night, my task was to talk to the the group about Jerusalem, and to answer a fundamental question: Why is Jerusalem special?

Well, the answer depends on who you ask.

If you ask one who is immersed in Halacha, the answer is simple: Jerusalem is a place that obligates us with unique mitzvot. One third of the Talmud deals with laws connected to Jerusalem, including the rules of the service in the Beit Hamikdash and the rules of ritual purity. A great deal of the practice of Judaism rotates around Jerusalem.

Envisioning these practices in real life yields a dramatic picture. The three time a year pilgrimage of “aliyah leregel” brought millions of Jews together into Jerusalem for the holidays; Josephus writes of a year when 256,500 Passover sacrifices were brought, and estimates that at least 10 people shared each one, which works out to over 2.5 million visiting little Jerusalem for Passover!! It was a time when people of all classes, countries and observances came together as “chaverim”, colleagues; as the Alexandrian Jewish philosopher Philo put it “countless multitudes from countless cities come, some over land, others over sea, from east and west and north and south at every feast.”. (In addition, there is another law called Maaser Sheni, a kind of “holy holiday”, where 4 out of every 7 years the farmer would bring 10% of the value of his produce to Jerusalem to enjoy meals in the holy city.)

The needs of those visiting Jerusalem required highways, which are being discovered by archeologists, and the importance of maintaining ritual purity led to a huge amount of Mikvaot being constructed; today it feels like every time someone does a construction project in Jerusalem, they unearth a 2,000 year old Mikvah! And in Bat Ayin, along one of the ancient highways to Jerusalem, there is naturally enough an ancient mikvah built for those who were going on a holy holiday to Jerusalem.

So this is the answer of the Halachic Man: Jerusalem is filled with opportunities for mitzvot. And while the answer means a lot to me, I recognize it may not resonate with people who do not share my Yeshiva background and training. So let us turn to another religious personality, the mystic.

For the mystic, the answer is simple: Jerusalem is the center of the universe. The Midrash Tanchuma in Parshat Kedoshim (10) writes that Jerusalem is Umbilicus Mundi - the navel of the world. It then explains:

The mystical view is well traveled, and even makes its way into popular culture. There is an old joke, that was actually told by Prime Minister Menachem Begin to President Reagan at a White House State dinner, that reflects this view. Begin’s joke goes like this:

(Begin continued quite beautifully by saying: “Now, Mr. President, neither of us has direct lines to God. I only believe that God listens to the prayer of a Jew and a Christian and of a Moslem -- of every human being. But, if I have to continue with the story, then I will say that when you come, as I do believe, to Jerusalem, I will immediately put at your disposal the red phone. [Laughter] On the house. [Laughter] A local call.”)

Such is the mystical view. Jerusalem is different because God lives there, and a call to Him from Jerusalem is a local call.  The great Spanish mystic Yoseph Gikatilla (1248 – after 1305) wrote in Shaarei Orah:

This resonates quite deeply with many people. When we go to the Kotel we put in a “kvitl”, a small note of prayers. Everyone does: Presidents, Prime Ministers, Actors and Rock stars. (Of course, the note is immediately pulled out by a reporter and published in an Israeli newspaper). All of them are closet mystics, and see Jerusalem as a place very close to God.

But not everyone is a mystic; not everyone feels comfortable putting notes in the wall. However, even rationalists can appreciate the powerful history found in Jerusalem. And if you turn to the historian, they will explain that Jerusalem has a remarkable history.

The personalities who walked through this city, who revered this city, have transformed the world. The founders of Judaism lived here: Abraham and Isaac, David and Solomon, Isaiah and Jeremiah, Ezra and Nehemiah, Judah Maccabee and his sons, Hillel and Shammai, Rabbi Akiva and Rabbi Yishmael; and the list goes on and on. Jerusalem’s influence is not restricted to Judaism; the important personalities of Christianity, Jesus, James, Peter, and Paul all lived in Jerusalem as well.

Because of it’s enormous importance in the Christian world, Medieval maps had Jerusalem at the center. Here is an example of a classic medieval map called a “T-O map” because it looks like the outline of a T in an O. At the center is Jerusalem. 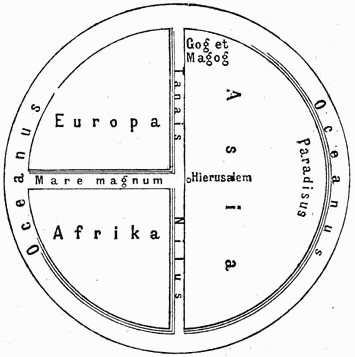 Another example is even more beautiful: The Bünting Clover Leaf Map of 1581, which has Jerusalem as the center of a world shaped like a clover: 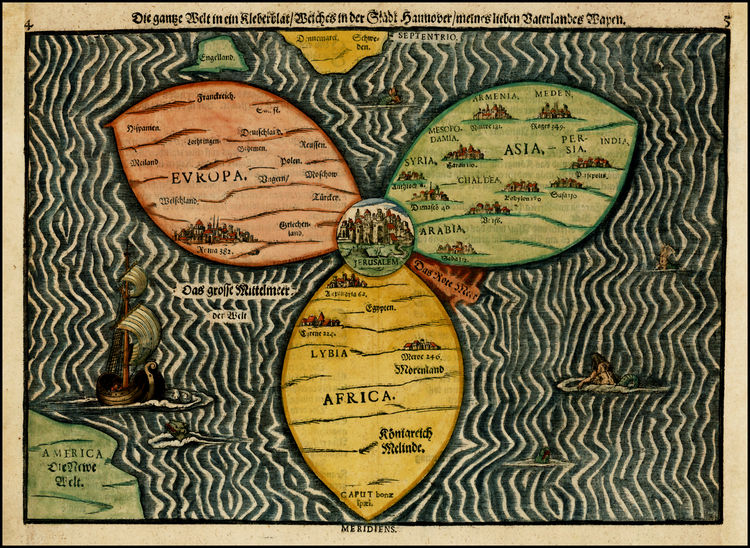 Jerusalem has always played a large role in world history. And those who know this history are immediately affected by Jerusalem. Thomas Friedman tells of the time Neil Armstrong visited Israel:
“When American astronaut Neil Armstrong, a devout Christian, visited Israel after his trip to the moon, he was taken on a tour of the Old City of Jerusalem by Israeli archaeologist Meir Ben-Dov. When they got to the Hulda Gate, which is at the top of the stairs leading to the Temple Mount, Armstrong asked Ben-Dov whether Jesus had stepped anywhere around there. “I told him, ‘Look, Jesus was a Jew,'” recalled Ben-Dov. “These are the steps that lead to the Temple, so he must have walked here many times.”

Armstrong then asked if these were the original steps, and Ben-Dov confirmed that they were. “So Jesus stepped right here?” asked Armstrong.
“That’s right,” answered Ben-Dov.
“I have to tell you,” Armstrong said to the Israeli archaeologist, “I am more excited stepping on these stones than I was stepping on the moon.””

If you ask a historian what is special about Jerusalem, they will tell you: it is a place that has changed the world. And it is exciting to walk where some of the greatest figures in history have lived.

I learnt about this answer when I visited Israel when I was 7. My Zaide who was 71 at the time, came with us; it was our first trip to Israel. The look Zaide had on his face upon arriving to Israel and going to the Kotel was the look of a man transformed, a Jew achieving his dream.

Zaide’s dream is our dream, and our dream is an ancient dream. Jews have dreamt of Jerusalem from the moment we left. When we went into exile in 587 B.C.E, we cried for Jerusalem, as it says in Psalm 137:

“If I forget you, Jerusalem, may my right hand forget its skill. May my tongue cling to the roof of my mouth if I do not remember you, if I do not consider Jerusalem my highest joy.”

We never forgot Jerusalem. We pray about Jerusalem every day, we pray towards Jerusalem every day, and at every wedding, we break a glass to remember Jerusalem. At the Seders we sing “next year in Jerusalem”.  We did so in good times and in bad, in the Kovno Ghetto and the Warsaw ghetto, in the Soviet Union and in Syria. In Ethiopia each year, children would look at the storks migrating towards Israel and sing a song to the storks:
“Stork, stork, how is our land?Stork, stork, how is Jerusalem?Stork, stork, give us the word!”.

The simple Jew has always dreamt of Jerusalem. And to him, it is a field of dreams, where we all connect, where the dreams of the Jewish history and Jewish people all overlap.

Forty nine years ago when we returned to Jerusalem the simple jew was overjoyed. My friend Donnie was in Israel volunteering during the Six Day War, and he told  me that the first night the Kotel opened for visitors, on the first night of Shavuot, people lined up all the way from The King David Hotel to get in. Such is the love of the simple Jew.

It is the love of the simple Jew that makes Yom Yerushalayim special. We know how so many who dreamt of this place never made it there to see their field of dreams; but now we can. Moshe Amirav, one of the the soldiers to reach the Kotel on June 7, 1967, said this:

“I can't help from smiling today when I recall how we searched for the Kotel. There we ran, a bunch of panting soldiers, wandering around the Temple Mount, looking for a huge stone wall…..We pass the Mograbim gate, pushing, hurrying, and all of a sudden we are stopped, as if hit by lightning. In front of our eyes stands, grey and large, quiet and sad - the Kotel. I remember feeling only once before such a feeling, when I was a child, and my dad brought me up close to the Aron Hakodesh…...Little by little I started getting closer to the Kotel. Slowly, as if I was sent to pray in front of an ark. I came closer, an emissary of dad, grandpa, greatgrandpa, and all the generations from all the diasporas that didn't make it here, and so they sent me here. Someone said the Shehechianu prayer, and I couldn't say amen. All I could do was put my hand on the rock, and the tears flowing out of my eyes were not mine...they were the tears of all the People of Israel, tears of hope and prayer, Hasidic niguns, Jewish dances, tears that singed and burned the grey heavy stone.”

This is what the Kotel is about. It is not just about ideas; it is about the simple Jew, the dreams of the Jewish People. It is about hearing the footsteps of previous generations, and feeling moved by their voices, their tears.