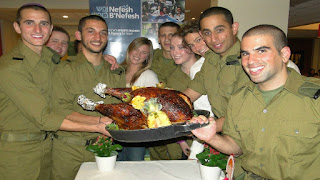 Why Israel Needs a Thanksgiving

As an American living in Canada, I get pretty homesick on Thanksgiving. Yes, Canada has a Thanksgiving too, but it’s a pretty tepid affair, basically an October rerun of Labor Day.

To Americans, Thanksgiving is serious business. Yes, the rituals are pretty simple: turkey, cranberry sauce and football. But it feels like a national holiday. In fact, Thanksgiving has a unique message that makes it the most popular national holiday in the U.S., even more popular than America’s Independence Day, the fourth of July.

The genius of Thanksgiving is that it bases patriotism on gratitude. Other national holidays around the world are grandiose, flag waving affairs, intended to glorify the country and inspire loyalty in the citizenry. These holidays feature public events, military parades and fireworks displays. Thanksgiving is a far simpler affair: it is always celebrated at home. It is about gratitude for a home, a happy family, a harvest, and at the same time, gratitude for a safe country. This minimalist approach to patriotism resonates with everyone, because countries don’t have to be great to be appreciated; they just have to be a place we can call home. The Rabbis of the Mishnah understood this, and said one must even pray on behalf of inferior governments, because without them “one person would devour the other alive”. Patriotism rooted in simple gratitude will have the widest appeal.

Gratitude is more than a popular argument for patriotism. It is the very foundation of any society. The Sefer Hachinuch, a 13th century work, sees gratitude as the foundation of all relationships, including belief in God. This view is adopted by many of the great thinkers of the Mussar movement. Indeed, in a gratitude free world, pessimism reigns. And pessimism is a harsh corrosive, with negativity about life in general infiltrating into, and undermining, all relationships. A marriage, a family or a community devoid of gratitude will certainly fall apart. Of course, this is true of a country as well.

Perhaps the one thing that ideologues of the right and left in Israel agree upon is pessimism. Both believe the country is falling apart; they simply quibble over who is to blame. The left invokes the assassination of the Yitzchak Rabin to demonstrate that the right are a bunch of bloodthirsty extremists who hate democracy. The right invokes the disengagement from Gaza to demonstrate that the left are a bunch of appeasing, heartless people who throw their fellow Jews out of their homes. However, if you remove the political particulars, all of these arguments are essentially the same: “The country is falling apart. And you, you (leftist idiot/rightist fanatic/religious dinosaur/soulless secularist) are the traitor who is to blame”.
Ironically, this pessimism is self fulfilling. The greatest danger to Israel is not the right or the left or the religious or the secular, but rather the way all segments of society relate to each other. These nasty divides are the product of sincere, but pessimistic ideologues, who are doing their best to prevent the destruction of Israel. But their pessimism adds a dangerously bitter edge to their rhetoric, transforming political opponents into personal enemies, and democratically elected Prime Ministers into dangerous pursuers of innocent blood.

Yes, as an American expatriate in Canada, I should not be giving sermons to people who have invested their lives in the Jewish homeland (and yes, if you must know, I do feel guilty about not having made aliyah). But any casual observer of the Israeli scene is aware that in political and public discourse, pessimism prevails over gratitude.

This is why Israel needs a Thanksgiving. A day to remember all the blessings we can be grateful for: For freedom and prosperity. For being able to live in the country of our ancestors. For a democracy, which, with all of its flaws, is still a true democracy. (Anyone who’s forgotten what a dictatorship looks like should visit one of Israel’s neighbors). And most importantly, to thank God for the miracle of the State of Israel. One hundred and fifty years ago, the probability of a state of Israel existing was less likely than a Martian invasion. Our ghetto dwelling ancestors, had they been able to see movies of contemporary Israel, would have assumed the Messiah had arrived. An Israeli Thanksgiving would allow to reclaim the sense of wonder previous generations had about the State of Israel.

Perhaps, if we get intoxicated with gratitude, we may begin to appreciate our brothers and sisters. Maybe the supporters of the left will show gratitude for the right’s intense love for this country. And supporters of the right will show gratitude for left’s intense concern for social justice. Maybe the Haredim will appreciate how secular Jews have built a safe and prosperous country; maybe the secularists will appreciate the profound Jewish spirituality the Haredim bring this country. Maybe we’ll learn to appreciate each other.

Actually, there is a Thanksgiving on the Jewish calendar: the holiday of Sukkot. We thank God for our harvest, and for watching over us and preserving us through our long history. Wouldn’t it be remarkable if on Sukkot, the entire country could sit down for a meal, in which thanks are given for the blessings of food, shelter, security and family? Wouldn’t it be nice if in the holiday tradition of Ushpizin, one could invite a guest with an opposing ideology?

That's beautiful. Once in a while I entertain thoughts of making aliyah (for now I'm in Maryland USA), and one thing I would love to happen would be for Thanksgiving to take off among Israelis because of the American immigrants as Mimuna has become popular because of the Moroccans.

Sukkot's got plenty of its own imagery and though the two holidays are both fall harvest-related, I feel it may do them a disservice to merge their sentiments. Hows for a Yom haHodayah on the 15th of Marcheshvan?