For God’s Sake, Get Vaccinated 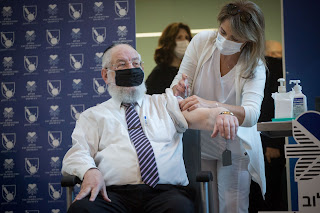 Should we get vaccinated for the coronavirus? Yes. Absolutely yes. Without a question: Yes. Jewish law gives the highest priority to safety and health and requires everyone to take advantage of this potentially life-saving shot. I wish that this short answer would be enough, and I could stop writing right here.

Unfortunately, there is a great deal of vaccine hesitancy in the Orthodox community. This surfaced first in Lakewood, New Jersey, in 2008. A school was concerned that a substantial number of their students were not properly vaccinated, and received a rabbinic ruling that they could exclude students who were not vaccinated. This was then followed up with a public letter from a group of prominent rabbis and doctors urging the community to vaccinate their children. Since then, vaccine hesitation in the Orthodox community has led to several outbreaks of mumps and measles, with multiple hospitalizations and fatalities. Despite all of this, anti-vaccination views persist in parts of the Orthodox community; in May 2019, there was an anti-vaccination rally in Monsey, which was attended by hundreds of people. Today, the opponents of childhood vaccinations are now leading the campaign against the coronavirus vaccination, and they have been far more successful undermining confidence in this new vaccine.

The roots of vaccination hesitancy in the Orthodox community come from a skepticism about science in general, and medicine in particular. There is a longstanding opposition to all secular studies, including science; unfamiliarity with science ultimately leads to contempt and suspicion. But there is a second element, which is rooted in a comment to this week’s Torah reading by Rabbi Moshe ben Nachman (Ramban), a 13th century Spanish rabbi and commentator.  The Ramban writes that “When the Jewish People are in a state of spiritual perfection...they will have no need of doctors, nor will they have to follow medical procedures even as precautionary measures, `For I, God, am your healer.' ” The Ramban argues that hidden miracles are constantly possible; and if a person truly perfects themselves, they can live in a world of Divine healing, without doctors, medications and health insurance. The Ramban’s misgivings about medicine are misgivings about a natural world which is imperfect, accident prone and random; in his view, these flaws are due to our disconnection from God.

Even so, the Ramban recognizes that to rely on prayer is impractical, and at the end of his remarks counsels that one should not rely on miracles, and see a doctor when needed. (The Ramban was a doctor himself.) However, other rabbis take the Ramban’s view a step further, and say that one can refuse medical interventions and pray instead. Rav Nachman of Breslov, a 19th century Hasidic Master, writes that the only reason why a person would need to chase after medical therapies is because they lack faith, “and God forbid (that they search for therapies), but rather they should place their full trust in prayer and supplications.” The Avnei Nezer, who passed away in 1910, writes that one can refuse to consult with doctors or accept their advice because the opinions of doctors are unreliable, and one would be better off with prayer.

The roots of Orthodox anti-vaccination rhetoric begin right here, with a misplaced understanding of faith. In order to properly respond, one must first grapple with a fundamental question: Why shouldn’t we rely on prayer alone? Well, to start with, ignoring medical advice is impractical. There are religious groups, like Christian Scientists, who have relied exclusively on faith healing and refused medical attention. Sadly, Christian Science cemeteries are filled with children whose lives could have been saved with a simple prescription for penicillin. (Due to dwindling membership, the Christian Science Church reversed itself in 2010, and began to allow adherents to seek medical attention.) Any attempt by humans to live as angels will fail. For this reason, the Torah commands us to fence off roofs to prevent accidents, “so that you do not bring bloodguilt upon your house if anyone should fall from it” (Deuteronomy 22:8). This Torah passage declares: One must not ignore the realities of nature, ever. Even if our souls can soar, our bodies can’t fly.

Maimonides harshly criticizes those who think that prayer can be a substitute for medicine. He writes about those who want to heal with prayer alone that “according to their mistaken and idiotic imagining, if a hungry man assuages his hunger with bread and thus overcomes the “sickness of hunger,” shall we say of him that he has thereby forsaken his trust and belief in God?” Hunger is natural, and so is disease, and both demand a practical response. A man of God must not be a naive fool.

The simple reason to embrace modern medicine, and vaccinations in particular, is because they are effective. But I want to offer a different argument, that these vaccinations are profoundly spiritual as well. Rav Soloveitchik writes that God left creation incomplete so that humanity can fix the world, and thereby become God’s partner in creation. An incomplete world will have disease; it is our God given responsibility to cure those diseases. Medicine is holy work, an act that completes God’s creation. For this reason, Jews have always had a passion for medicine. Many medieval rabbis were also medical professionals, and they saw this as part of their religious calling. Joseph Shatzmiller in Jews, Medicine, and Medieval Society, tells of regions in Medieval Europe where less than 1 percent of the population was Jewish, yet Jews were over 50% of the doctors. There's a long Jewish history to the proud phrase “my son, the doctor,” and in part, this is because of the Jewish yearning to make the world a better place. We don't only connect to God through prayer; we can also connect to God through healing and compassion. The scientists, doctors, and nurses that cure disease are making the world a better place, and doing God’s work.

There is an old joke about a man who prays to God to save him from an incoming flood. Because of his deep faith that God alone will save him, he first ignores a canoe, then a motorboat, and finally a helicopter that offer to save him. After he drowns, the man goes up to heaven. He confronts God, and asks why God didn’t come to his rescue. God responds: “Of course I tried to save you. I sent you a canoe, a motorboat and a helicopter. You just didn’t take them.”

This past December God sent us a vaccine. I have been inspired by the pictures and videos of rabbis around the world saying prayers and blessings right before getting their shot, thanking God for goodness of their fellow man. And those prayers recognize God’s part in this man-made miracle. In the last year, an army of researchers, doctors, and nurses have worked tirelessly to vaccinate the world and save lives. They are doing God's work. So for God's sake, please get vaccinated.