Tragedies Then and Now

I am heartbroken. Teenagers arriving on vacation, whose lives are cut short by terrorism. Young men and women, guilty only of the crime of being Israelis and Jews.
This is a story that repeats itself, and has done so too many times. Jewish blood is cheap. Today it flows in the streets of Bulgaria; 18 years ago, it flowed in the streets of Buenos Aires; 40 years ago, it flowed in the streets of Munich. Does anyone even care? The IOC can’t give a minute of its’ precious time to remember the victims of the Munich Massacre; Hezbollah has gone on to control Lebanon, and now the international community will be working overtime to urge “restraint” on Israel, while paying lip service to the victims of this tragedy.
We must do better. In the 29th Kinnah that we recite on Tisha B’Av, (“Amarti”), the author calls for justice for those who perished in the first Crusade in 1096. In it, the author writes that God counts the blood of the victims, drop by drop.
We can do no less. The IOC, Iran and Hezbollah say Jewish blood is cheap; but we will oppose them, every step of the way. And we too will count each drop of blood; we will never forget the victims, and forever call out for justice.

Posted by Rabbi Chaim Steinmetz at 6:01 PM No comments:

Why Isn't NBC Doing Anything to Remember the Victims of the Munich Massacre?

Today, there was an exceptional article by Deborah Lipstadt entitled "Jewish Blood is Cheap."

A powerful is the suggestion from Claude Salem to pressure NBC to do something. Shouldn't NBC at least run a public service announcement with the names of the Israeli athletes? Contact your congressman and senator as well; they should call NBC as well.

Please tune out the opening ceremonies, and remember the Israeli athletes, as mentioned here.

P.S. NBC's Bob Costas will be doing a moment of silence. Read about it here. He deserves our thanks.
Posted by Rabbi Chaim Steinmetz at 9:48 AM No comments: 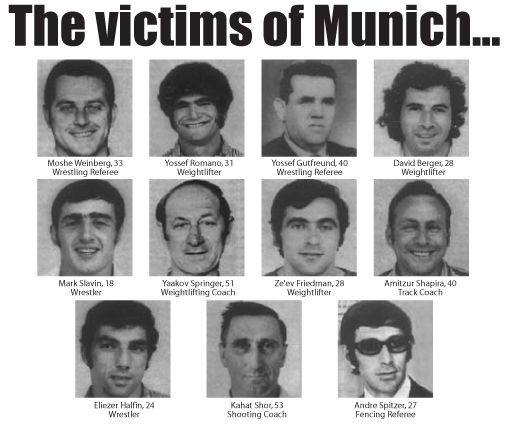 See an exceptional article on the CNN website about this -  here.


See my post on creating a minute of silence here.
Posted by Rabbi Chaim Steinmetz at 2:17 PM No comments:

".....If the IOC will not spare even one minute for their memories, we will do it ourselves. The opening ceremonies take place on Friday evening in London; instead of watching, we should shut off the Olympics, read the names of the 11 victims, and observe our own minute of silence....."
Posted by Rabbi Chaim Steinmetz at 10:16 AM No comments:

The Higgs Boson and the Soul of Mankind

All of mankind should be cheered by the remarkable discovery of the Higgs Boson particle. It stands as a remarkable advance in the field of quantum physics; scientists can now dream of even more remarkable achievements regarding dark matter and even traveling at the speed of light.

There is no doubt that man was meant to be a great discoverer and creator.  The Bible describes man as one who is created in the image of God, as one who is “just a little lower than angels”. Scientific advancement is part of humanity’s destiny, and discovery is part of our very nature. Yes, at times religious figures have treated science with hostility (think of the infamous Galileo controversy, and today’s battles over evolution); but those battles were clearly a mistake. Scientific discovery underlines humanity’s unique genius, abilities granted to the pinnacle of God’s creation. When the man of science unlocks another one of the cosmos’ mysteries, the man of faith is inspired as well.

But with this discovery comes concerns. How will we react to this discovery: Will our newfound scientific knowledge breed an arrogant attitude to all other forms of human exploration?

One religious philosopher who has paid careful attention to this issue is Rabbi Joseph B. Soloveitchik. In his classic essay “The Lonely Man of Faith”, Soloveitchik notes that man is both a scientist and a philosopher, able to dissect and define the material world, as well as puzzle over the existential. Soloveitchik explains man must ask more than one type of question to truly apprehend reality in its fullest. He writes that man must not only ask "How does the cosmos function?" but also "Why does the cosmos function at all?" and "What is its essence?"

Here, the concern with the discovery of the Higgs Boson, or any discovery, is the same. Will our success in the realm of the scientific distort our vision of reality? Will we lose sight of larger questions that science cannot answer?

At one point in the essay, Soloveitchik outlines what could go wrong when the man of science becomes consumed with his discoveries, and forgets the other dimensions of existence:

“His pride is almost boundless, his imagination arrogant, and he aspires to complete and absolute control of everything. Indeed, like the men of old, he is engaged in constructing a tower whose apex should pierce Heaven. He is intoxicated with his own adventures and victories and is bidding for unrestricted dominion.”

This scenario need not come to pass. We can take pride at in the discovery of the Higgs Boson, another landmark in the march of scientific progress. Let’s hope that mankind will show similar passion about charting the landscape of the human soul as well.

Posted by Rabbi Chaim Steinmetz at 8:07 PM No comments:

Pop Jewish: Edon Pinchot, The Fourth of July, and the Jewish American Dream

My newest post on the Pop Jewish blog. let me know what you think.

Pop Jewish: Edon Pinchot, The Fourth of July, and the Jewish A...: Edon Pinchot, a 14 year old singing sensation from Chicago has triumphed on ABC’s hit show “America’s Got Talent”. I’m proud of Edon’s vic...
Posted by Rabbi Chaim Steinmetz at 8:48 AM No comments: