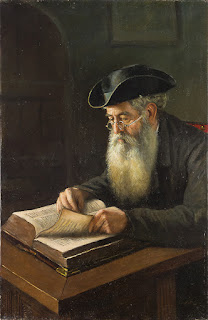 Can a disabled person be a spiritual leader? The answer might seem simple, but it’s not. The reason why it is a challenging question is because of this week's Torah reading, something I first realized when I confronted it directly.

On the weekend of Parshat Emor, in 2009, my synagogue held a unique Bar and Bat Mitzvah celebration. The celebrants were a group of 6 adults, most in their forties and fifties, who had never had a Bar or Bat Mitzvah. They were residents at the Miriam Home, a Montreal institution which provides services for intellectually disabled adults. These Bnei Mitzvah had turned 12 and 13 at a time when developmentally disabled children were hidden away, and because of that, they had been excluded from a ceremony that every Jewish child takes for granted.

On Thursday morning we held a rehearsal to acclimate the participants. As the press cameras rolled, I took out the Torah, and began to call up the men to practice their aliyot. As part of the rehearsal, I read the Torah between aliyot. And then, there it was, right in front of me: the section that declares that a baal mum, a blemished Kohen (priest), cannot serve in the Temple. A Kohen who has a broken hand or broken foot, who is a hunchback or a dwarf, who is blind, lame, or has scurvy, cannot serve before God in the Temple. I was shocked. How could we read this passage on the very week we were honoring the disabled? I thought of using the time-tested Rabbinic technique of ignoring uncomfortable topics, and in my sermon, talk about something else. But the more I thought about it, the more I recognized that this coincidence was not a coincidence, and that I was being called upon to deal directly with this issue.

That Shabbat morning I offered a response, which concluded that the reason why the baal mum is disqualified from serving in the Temple is because the community would be too superficial to accept them. The real blemish of the baal mum is in the hearts of the average man, and the physical blemish on the Kohen does not diminish him at all in the eyes of God. The Torah is holding a mirror to the community and its inability to look past appearances.

I knew this was a radical approach, but that morning, it was obvious to me that it was the correct one. But this idea is controversial. Three years later, this very same issue was the topic of serious debate in Israel. Rav Benny Lau wrote an article in which he concluded that the Torah’s reason for disqualifying the baal mum is because they were once considered undesirable; however, if the attitudes of the community changed, so would the Halakhah. This article drew a sharp response from Rav Aharon Lichtenstein, who saw this argument as a deviation from standard Halakhic methodology.  Rav Lau responded, explaining that he was emphasizing that all too often, Halakhic stringency is applied to those with disabilities. In the end, both sides agreed about the importance of ethical sensitivity and respecting the integrity of the Halakhic system, and differed mostly on emphasis and nuance.

This debate was primarily about the Halakhic process, and how to apply it regarding those who are disabled. But what motivated me that Thursday morning was a different question: When a disabled person reads Parshat Emor, what is it saying to them?

The Zohar writes that the blemished Kohen is disqualified is because “holiness on high cannot dwell in a blemished place.” (The Magen Avraham explains that the Zohar’s view would bar a person with a physical blemish from serving as the chazan; however, he notes that the vast majority of Halakhic authorities disagree with the Zohar.) The Zohar’s perspective is both shocking and painful to those with disabilities. But a very different understanding of the Torah reading comes from the Rambam. In the Moreh Nevukhim (III:45), he writes:

“In order to raise the estimation of the Temple, those who ministered therein received great honour: and the priests and Levites were therefore distinguished from the rest. It was commanded that the priests should be clothed properly with beautiful and good garments, "holy garments for glory and for beauty" (Exod. xxviii. 2). A priest that had a blemish was not allowed to officiate; and not only those that had a blemish were excluded from the service, but also--according to the Talmudic interpretation of this precept--those that had an abnormal appearance; for the multitude does not estimate man by his true form but by the perfection of his bodily limbs and the beauty of his garments, and the temple was to be held in great reverence by all.”

The Rambam explains that the clothing and physical appearance of the Kohen were a question of aesthetics; they needed to dress well and look good to gain the respect of the multitude. The very use of the word “multitude” tells you everything you need to know about this passage; to the Rambam, the multitude are the uneducated masses who are unable to understand the deeper truths of the Torah. The Rambam is teaching us that a blemished Kohen is disqualified because the multitude won’t respect him. The disqualification of the blemished Kohen is a concession to the bitter reality that people judge others by their appearances.

And this reality remains true to this day. Multiple studies have shown that voters are deeply influenced by how a politician looks, so much so, it can often decide the winner. And this superficiality has gotten worse since the advent of TV. As Neil Postman notes in Amusing Ourselves to Death: Public Discourse in the Age of Show Business, William Howard Taft would never get elected today because of his appearance. Physical appearance plays a larger role today than it did 200 years ago.

The section on the baal mum challenges us to recognize our own spiritual blindness, and how we subconsciously diminish those with physical and intellectual disabilities. Throughout history, multiple societies have stigmatized, mistreated and even murdered the disabled. Due to social pressure, people with intellectual disabilities were often hidden away, their very existence treated as a secret. Up to just a few years ago there was little possibility for an intellectually disabled child to have a large, well attended, public Bar or Bat Mitzvah. It was considered dramatic when Vice President Hubert Humphrey spoke about his granddaughter having Down syndrome in the 1960s, and many look back at that as a turning point in changing people’s attitudes. But change has come very slowly. For too long, people simply couldn’t see the person beyond the disability.

I learned that Thursday morning how to see things differently. Human vision is clouded by the superficial and the subjective. There is a powerful verse in the Book of Samuel that says that “Man sees only with his eyes, but God sees into the heart.” Humanity’s perspective is shallow, limited by what our eyes can see. We all need a pair of Divine eyeglasses.

On that Shabbat morning in 2009, we celebrated a remarkable Bar and Bat Mitzvah. Nearly 700 people crowded into the synagogue to be a part of this event.  In front of us were six people whose hearts were full of joy and pride. We clapped each time someone was called to the Torah, said a prayer, or read a speech. Time and again, these belated Bnei Mitzvah got a standing ovation. In their restrained demeanor and gentle words we could see the long road they had taken in search of dignity, and all the struggles they had faced. And most of all, their faces radiated love; you could immediately sense the connection between the participants and everyone in the room. Everyone in the synagogue cried, smiled, and then cried and smiled again. It was a transcendent moment.

One of the participants turned to me and said: “Thank you for making my dream come true.” But it was not only her dream; it was everyone’s dream. That morning, an entire synagogue was able to see past superficial disabilities and appreciate the gifts of love, friendship, and community. And for a few short moments, we were all wearing Divine eyeglasses.

This week, when I read the Parsha, I will put on my Divine eyeglasses. I will see everyone around me differently, and give them the love and respect they truly deserve.