When Sleeping in Synagogue Makes Sense 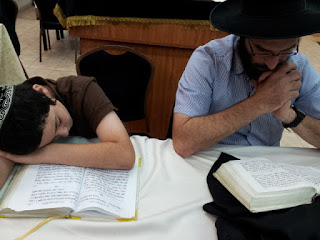 It is a letter that redefined the Orthodox Jewish community. While the exact details are unclear, it appears it was written somewhere between 1705 and 1712. The author lived in a city where there was a congregation of Spanish and Portuguese Jews. The scholarly consensus is that this is a reference to London, in a community that was rapidly growing a half a century after the resettlement of the Jews in England.

he letter contained a halakhic question for Rabbi Tzvi Hirsch Ashkenazi, the author of the Chacham Tzvi. The author of the letter relates that the members of the Spanish and Portuguese synagogue were bound by a vow of excommunication not to pray at any other minyan within five parasangs (roughly 12 miles) of their synagogue. However, the community had not objected to the building of an Ashkenazi synagogue, and from time to time individual members of the Spanish and Portuguese synagogue would join the Ashkenazi synagogue.

The writer of the letter complained that members of the Spanish and Portuguese synagogue who were lax in their religious observance were allowed to lead the services and read the Torah. This upset the letter writer and many of the more observant members, and an entire group was planning to join the Ashkenazi synagogue. The question they posed to Rabbi Ashkenazi was: What about the vow of excommunication? Are they halakhically permitted to leave the Spanish and Portuguese synagogue?

Rabbi Ashkenazi gave a sharp reply, which appears in his Chacham Tzvi, responsa 38. He argued that allowing the non-observant to lead services at the synagogue was a Chilul Hashem, and therefore the letter writer and his group should leave the synagogue and ignore the vow of excommunication.

This ruling would prove to be both influential and controversial. Multiple rabbinic responsa would debate the merits of the Chacham Tzvi’s claim regarding non-observant synagogue leaders. But beyond the specific halakhic issue, this 300-year-old question forces us to consider what the purpose of a synagogue is.

Our Torah reading discusses the construction of the Mishkan, the first Jewish Sanctuary. This Sanctuary becomes the blueprint for the Temple and eventually all synagogues. Why did the Jews need a Sanctuary? Nachmanides explains that the Sanctuary was a home for the Divine Presence, a continuation of the experience on Mount Sinai. But Maimonides talks about the Temple being a place of human worship, and he adds a second element: The Temple is a place where people would gather on the pilgrimage festivals. This second purpose highlights another aspect of the Temple and Jerusalem (which Maimonides sees as an extension of the Temple); they are also the national center, places that bond the Jewish people together.

Maimonides notes that Jerusalem was not in the territory of any tribe, and it was meant to belong to the nation as a whole. The pilgrimage holidays, when the far-flung population gathered together, was meant to “lead to love of individuals and groups one for the other.” Aside from the holidays there are other commandments, netah revai, maaser beheimah, and maaser sheni, which end up requiring people to visit Jerusalem and make elaborate meals, meals at which they will certainly invite guests and celebrate together. The Temple and Jerusalem play a critical role in bonding the Jewish people.

With the transition from the Temple to the synagogue, the social element became more pronounced. Prayer was to be done in a community of no less than ten, and the new institution was called by all a Beit Knesset, “a house of gathering,” where communities meet together. The synagogue is both a house of God and a home for Jews.

In the 19th century, these two missions started to pull apart. In many countries, the synagogue became an ideological battleground, where different philosophies fought for dominance. Communities divided during the battle over reform, and then divided again when Orthodox communities debated how open they should be. Adam Ferziger, in his Exclusion and Hierarchy: Orthodoxy, Nonobservance and the Emergence of Modern Jewish Identity, explains that the Chacham Tzvi’s responsa became a model for a more exclusionary definition of Orthodoxy. Since the 19th century, Orthodox synagogues have had to confront a choice between supporting the aspirations of the devoted and embracing the wayward and unaffiliated.

Along the way, many synagogues, especially in smaller communities, emphasized the social role of the synagogue. They embraced anyone who would come through the door; and this allowed them to engage with people who otherwise would never come. The writer and publisher, Harry Golden, asked his atheist father why he attended synagogue religiously if he didn’t believe in God. His father responded: “Everyone goes to synagogue for a different reason. Garfinkle goes to talk to God. I go to talk to Garfinkle.”

These small-town synagogues were open to anyone, whether they came to speak to God or to Garfinkle. What is interesting is that even those who came to “speak to Garfinkle” were transformed, because the social connection can inspire a spiritual awakening as well. Chabad has been a leader in recognizing this reality, and through friendship and devotion, they have inspired many people to reconnect with their spiritual heritage.

In January 1998, a devastating ice storm hit Montreal; most homes were without heat and electricity. My previous synagogue, which had an emergency generator, was turned into a shelter overnight. The staff and members of our synagogue oversaw this operation, which housed 180 people in the building, and served a thousand hot meals a day. When I was asked about this remarkable transformation in interviews, I quoted an old Rabbinic joke: “There was a rabbi whose synagogue was being converted into a shelter after floods devastated his community. The local shelter coordinator, trying to assess how many people to send to the synagogue/shelter, asked the rabbi: ‘How many people can sleep in your synagogue?’ The rabbi responded, ‘Well, during my sermon on Yom Kippur, our synagogue sleeps 1,000.’"

I particularly like this joke, not just because it pokes fun at sermons, but because it highlights a powerful truth. A synagogue must be a place that offers shelter to any Jew who needs it, because a thousand sermons cannot equal the inspiration of one helping hand. This is holiness in action - and we should never forget that when providing someone a communal home, we inspire them as well.