Purim and Pacifism, God and Goodness 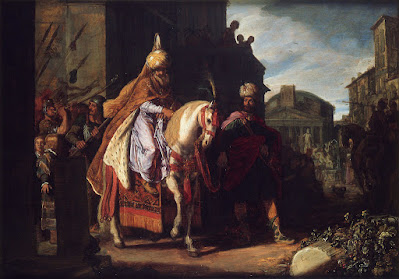 At the International Military Tribunal at Nuremberg in 1946, Julius Streicher was sentenced to death for Crimes against Humanity. The editor of the Nazi newspaper, Der Sturmer, Streicher’s constant incitement against the Jews helped whip Germany into a genocidal frenzy. A Nazi until his last breath, Streicher entered the death chamber in a fury, loudly shouting “Heil Hitler.” According to the Associated Press report, in his final moments “Streicher was swung around to face the witnesses. With burning hatred in his eyes, he looked down at them and shouted: “Purimfest 1946.”

It might seem odd that a Nazi war criminal would mention Purim in his last words, but this was not an isolated outburst. The Nazis were obsessed with Purim. In a speech right after Kristallnacht, Streicher spoke to the crowd about how “in one night, the Jews butchered 75,000 Persians,” and that if the Jews “defeat” Germany, they “will institute a new Purim festival.” On other occasions, Streicher claimed that the Damascus Blood Libel was a “Purimmorde,” in which Jews murdered non-Jews to use their blood on Purim. Hitler, in a 1944 speech, said that if Germany loses the war, the Jews of Europe would make a “second triumphant Purim” to “celebrate the destruction of Europe.” Jewish power looms large in the paranoid mindset of anti-Semitism, and the Purim story of the Jews killing their enemies alarms the enemies of the Jews.

One would expect anti-Semites to hate Purim. The Book of Esther tells how the Jews defended themselves, and refused to oblige anti-Semites by disappearing. But there are idealists who are deeply uncomfortable with Purim as well, and see it as a holiday that romanticizes the killing of 75,000 people. Elliott Horowitz, in his book Reckless Rites, cites multiple scholars and authors in the 19th and early 20th century that found fault with the violence displayed in Megillat Esther. The influential Bible scholar Samuel Rolles Driver wrote that "much fault has been found with the temper displayed in the Book of Esther... (which can be) said to breathe a spirit of vengeance and hatred without any redeeming feature." The noted rabbinic scholar Claude Goldsmid Montefiore wrote that Purim “lacks an inward and essential religious justification… (and it) is surely a doubtful propriety to give public thanks to God for a triumph... that is yet not lifted up out of the religion of crude vengeance...” The well-known American literary figure Mary Ellen Chase expressed her distaste for “the atmosphere of hatred and lust for blood which runs throughout” the Book of Esther. These authors would prefer a different holiday with different heroes, focused on love instead of war, inspiration instead of intrigue. Even the Talmud says that some of the Sanhedrin criticized Mordechai for his political aspirations. These critics see the realpolitik of the Book of Esther as too vulgar for religious tastes; violence has no place in the house of the Lord.

Pacifism makes good religious sense. Isaiah tells us that the ultimate dream is of a time when all people “shall beat their swords into plowshares and their spears into pruning hooks. Nation shall not take up sword against nation; they shall never again know war.” To the pacifist, holiness and war are polar opposites, never to reconcile. And there were significant rabbinic figures who argued for pacifism. Aharon Shemu’el Tamares, a well- known early 20th century Polish rabbi, wrote a sermon for Passover about the importance of non-violence. Tamares explains that “a person who focuses solely on protecting himself, and is constantly preparing to protect himself from the attacks of others, undermines his righteousness, and (actually) awakens in himself the attributes of wickedness; because he imagines only frightening thoughts, that other people want to swallow him up, and therefore he can depend only on his own power... and this means that he denies the sovereignty of truth and justice, and instead elevates to the throne the power of his own fist.” Tamares further expounds that for this reason the Jews were told to remain indoors during the plague of the firstborn; God may be punishing the Egyptians, but the Jews had to stay away from any act of revenge and war. To Tamares, pacifism is obvious, an answer that comes innocently from the heart, without the twisted logic of politics and politicians. The proper path in life is for one to avoid bloodshed at all costs.

Pacifism is morally seductive, but it is wrong; human goodness is not identical with angelic innocence. The Torah doesn’t expect us to transcend life; instead, it demands that we grapple directly with evil. Rav Chaim of Volozhin explains that the central commandment of Judaism, Torah study, is not about an otherworldly experience of the divine; it is rather an attempt to bring God into the mundane world to help refine human life. Rav Chaim offers as an example the Talmudic passages about how a judge can assess the credibility of litigant; he focuses on what a liar might claim, and how one might perpetuate a fraud. Clearly, meditating on the mindset of mendaciousness is not a spiritually transcendent experience. But by teaching judges how to lie, the Talmud also teaches them how to do justice; studying these passages brings goodness into this world. The same is true with war. To avoid violence simply allows the forces of evil to triumph. Pacifism is impractical idealism at its worst; it insures that the evil shall inherit the earth.

Perhaps this is why God's name is not mentioned in the Book of Esther: to emphasize how one can do God's work in the ugliest, most ungodly of situations. The lesson of the Book of Esther is that the conniving maneuvers in the palace and the horrific bloodshed in battle served the cause of goodness; without them, a genocide would have occurred, and the Jewish people would have vanished. In the human realm, what is spiritually repulsive can sometimes be morally necessary. In the Book of Esther, in a setting that is truly profane, deceit and killing are necessary to prevent a true moral outrage; God may not be visible, but goodness is.

Discussions of Jewish self-defense were theoretical for much of the last two millennia. But since 1948, they are practical questions. Even when discussing self-defense, it is critical never to lose sight of idealism. For a student of the Torah, that goes without saying. Yet at the same time, it is important to recognize that protecting the Jewish people is an act of idealism, as well. Those who live on earth should not imagine that they inhabit the heavens.

Daniel Gordis shared an anecdote about an army presentation he attended. It was for parents of army age daughters in the religious Zionist community. Until recently, young women in this community did not serve in the army; many still don’t. The feeling is that the army requires religious compromise, and that it is best that the young women pursue national service instead. He explained that as the evening started, some of the parents were downright hostile, clearly opposed to the prospect of their daughters joining the IDF. At one point, an obviously angry father stood up, turned to the base commander and asked (or more accurately hissed), “Do you make the girls work on Shabbat?” The room was perfectly silent, for everyone knew the answer. No one moved. Even the base rabbi said nothing. He stood at the podium, leaned into the mic and, lost in thought, played with his beard.

Suddenly, one of the three soldiers who’d been brought to address the parents, a young woman with her uniform shirt buttoned up to her chin, her sleeves extending to her wrists and her army-issued skirt down to her ankles, looked the father right in the eye, and without being called on, said to him, “Of course we work on Shabbat.” And then, after a second’s pause, she added, “Gam ha’oyev oved beshabbat” – the enemy also works on Shabbat.

It was a game changer. “What?” she essentially asked. “You think we do this for fun? There are people out there trying to destroy us. Either we’re as serious about this conflict as they are, or they’re going to win.”

Shabbat is meant to be a taste of the world to come, a divine realm detached from the crass concerns of day-to-day life. And yet there are times when one must work on Shabbat, one must fight on Shabbat; without it the enemy might win, and without it goodness might disappear.

That is the lesson of the Book of Esther.