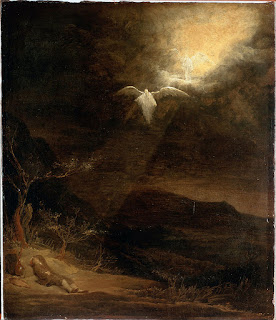 It is easy to be swept up by the emotional power of the first narrative in our Torah reading. Yaakov, who is running for his life, is suddenly homeless and hopeless; he lies down to sleep in the middle of nowhere, with the ground as his bed and a stone as his pillow. He has a powerful vision, with angels walking up and down a ladder and God calling out to him, offering blessings of protection and redemption. Yaakov awakens overawed by his dream; he names that place Beit El, the house of God, and dedicates the stone he slept on as a monument to be used for divine service. Yaakov promises he will return to Beit El to build a house of worship, one that will be used by future generations.

But this plan is not meant to be. When we skip forward to the Book of Kings, we see that the site of Yaakov’s dream is desecrated. After the Kingdom of Israel splits, Jeroboam refuses to let the people of the Northern Kingdom return to the Temple in Jerusalem. Instead, he builds a competing Temple in Beit El, along with competing holidays, and installs two golden calves for worship. Beit El fails to live up to its original promise.

Even more dramatic is the Torah's change in attitude towards monuments. Yaakov sees his holy monument as the foundation of a future Temple; but in Deuteronomy (16:22), monuments are not just forbidden, but condemned as a mode of worship that “the Lord your God detests." What is loved by Yaakov will be rejected by the Torah of Moshe. Many commentaries struggle to resolve this contradiction. Rashi offers a fascinating interpretation, and writes, "Although monuments were pleasing to God in the days of our Patriarchs, He now hates them, because the Canaanites made monuments a fixed rule in their worship of idols."  It doesn’t matter that monuments have a deep historical connection to Jewish worship; if they are now used by the Canaanites for idol worship, they are to be rejected.

Rashi's insight is profound. Our Jewish identity is not just about who we are; it is also about who we aren’t. Elsewhere, the Torah forbids imitating the practices of idolaters, a prohibition called Chukat Akum. This Rashi is cited as an example of how far this law extends; even if a practice is a long held Jewish custom, it can still be prohibited as Chukat Akum if it is similar to idolatrous practices. Chukat Akum insists a Jew must make a point of being different than others. This prohibition of reaction and negation might seem strange because contemporary spirituality is always expressed in affirmations. But Chukat Akum reminds us that an authentic identity is not just about what you choose to be, it is also about what you choose not to be.

In the diaspora, the laws of Chukat Akum have been critical to maintaining communal cohesion.  One school of thought in rabbinic literature saw Chukat Akum as primarily about separatism, of distinguishing Jews from non-Jews. Maimonides expresses this view when he writes that "We may not follow the statutes of the idolaters or resemble them in their [style] of dress, coiffure, or the like…" In another passage, Maimonides offers another example, that the prohibition includes saying that “Since they go out wearing purple, so too I will go out wearing purple.” Rabbi Israel Bruna, a 15th century German Rabbi, sees separation as the reason for Chukat Akum. Even though the Talmud makes it clear that men do not have to cover their heads, Rabbi Bruna writes that Jews of his time had to wear a head covering for otherwise they “will not be distinguishable among the non-Jews.” He explains that what was permitted by the Talmud would not be allowed in times of exile, when it is critical for a Jewish minority to establish an independent and separate identity.

Among the medieval authorities, there is a competing school of thought, one of selectivity. It sees rationality as the determining principle of whether or not a practice is considered Chukat Akum. What is prohibited are practices that reflect paganism, superstition and indecency. Beth Berkowitz points out in Defining Jewish Difference: From Antiquity to the Present, that in medieval Jewish-Christian polemics, Jews would often refer to the rationality of the Jewish tradition in contrast with that of Christianity; and that may have influenced how the law of Chukat Akum was perceived as well.

This definition of Chukat Akum offers a different lesson; the goal is for Jews to take a critical eye to every new practice and reject foolish customs. This will ensure that one doesn’t unconsciously assimilate unworthy pagan perspectives.

This debate was less important when Jews were largely excluded from communal life. But as Jews began to enter general society in the Renaissance, Chukat Akum was debated once again amongst halakhic authorities. Does Jewish identity require one to always be different, even in dress, language and culture?

Around 1460, Rabbis Judah Messer Leon and Samuel de Modena posed a halakhic question to the Maharik, Rabbi Joseph Colon Trabbotto. Both had been given the privilege of wearing academic gowns; but local critics said that the academic gown was a violation of Chukat Akum, because it is an imitation of non-Jewish dress. The Maharik ruled that the gown was permissible. He disputes the idea that Jews must dress differently than others, and adds that the academic gown is rational, and allows people to be recognized for their achievements. The Maharik’s ruling best articulates the philosophy of selectivity, and gains wide acceptance. But some later authorities, including the Gaon of Vilna, dispute the Maharik’s ruling.

Even the celebration of Thanksgiving is forbidden by some authorities. Rav Yitzchak Hutner writes that it is forbidden because one must resist any desire to imitate the customs of general society. This ruling is striking in its extremism; even Thanksgiving, a celebration based on the virtue of gratitude, in appreciation of a country that has done so much for the Jewish community, is considered to be anathema. However, many rabbis disagree. Affirming what is good is a critical value as well, and Thanksgiving represents values cherished by the Jewish tradition. (For precisely this reason, KJ used to hold a special Thanksgiving prayer service.)  To be a Jew in the 21st century requires one to carefully select, to affirm what is positive, and to reject what is negative in general society.

Since the early 1800s, it has become possible for Jews to fully engage in general society. To accomplish this, some argued that Jews need to blend in and stop being different. Judah Leib Gordon, in his poem “Hakitzah” (Awaken), famously wrote:

“Be a man in the streets and a Jew at home.”

This is very comfortable advice. Turning Judaism into a private affair hidden behind closed doors makes it much easier to be part of a minority; there is no standing out in public spaces, no uncomfortable glances from strangers. Unfortunately, this approach has been spiritual quicksand. What was carefully hidden became unimportant, and what was private became a mere hobby. Without a strong and independent identity, Jews slowly assimilated. It became the path of least resistance.

Chukat Akum is a reminder that one cannot just be a Jew at home; sometimes a Jew needs to be a Jew in the streets, to resist fads and fashions. That is part of our mission. Jews have been iconoclasts from the very beginning, from the moment that Avraham smashed his father’s idols; and we are ready to smash Yaakov's monument as well. As a minority, we must know who we aren’t as well as who we are. But how far do we have to go in distinguishing ourselves? That still is a matter of debate.