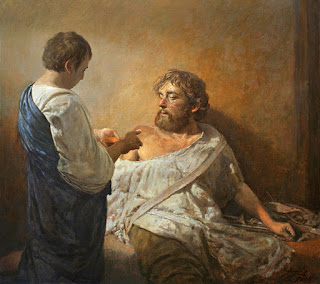 Esav is a problem child from the very beginning. The Bible carefully catalogues the failings of his early years. He is a hunter, a violent job that contrasts sharply with a family preference for shepherding -- and in an act of extreme impulsiveness, he sells the sacred privilege of the first born for a bowl of lentils. His choice of wives is inappropriate, marrying coarse women from the local Canaanites, and in his fury, he vows to murder his brother.

It is clear that Esav was fated to be a failure. The Midrash says that even in utero, Esav would jump every time his mother passed a pagan temple, as if he was ready to go in and worship. Esav is born with a ruddy complexion, and his body is covered in a coat of hair. Rashi says the redness indicates a propensity for murder. The commentary of Rabbi Moise Tedeschi, the Hoil Moshe, speculates that the word Esav means prehistoric man, which indicates that those around baby Esav thought his hairy, red appearance made him look like a small caveman. Other negative comments in the Midrash interpret Esav’s name as a reference to animal food (esev) and futility (shav). Esav appears flawed from birth.

This description of Esav is extremely problematic. How can a person be born bad? Free will is a fundamental Jewish belief; Maimonides calls it “the very pillar of the Torah and the commandments.” In his Letter on Astrology, Maimonides argues that if man had no free will, the commandments would be pointless; people would end up doing whatever they were predestined to do anyway, with or without commands. Free will seems to be a given in Judaism, and like Maimonides, many Jewish thinkers are free will absolutists, believing that everything is a matter of choice.

From this vantage point, every child has exceptional opportunity. As Maimonides puts it, “Every man is capable of being as righteous as Moshe our teacher or as wicked as Yeravam.” Remarkable turnarounds are always possible. Rabbi Naftali Tzvi Berlin, the Netziv, would tell a story about himself that emphasizes how easily potential can be overlooked. He said that when he was a child in school, he was lazy and didn’t pay attention. When he was eleven, he overheard his father saying to his mother that he'd spoken to young Naftali Tzvi’s rebbe, and together they concluded he would never become a Torah scholar; because of this, his father arranged for him to apprentice with the local shoemaker after his Bar Mitzvah. Young Naftali Tzvi ran to his father and begged for another chance, and overnight, he became an excellent student.

As a young child, the Netziv turned his life around. When we read our parsha, we must consider the very same question about Esav: Could he have transformed himself? Is changing behavior just about cracking down and strengthening one’s will? Free will is not quite that simple. Many Jewish thinkers take a different view than Maimonides; some, like Rav Zadok Hakohen of Lublin, fully accept determinism, the view that there is no free will. Rav Zadok is concerned that free will contradicts God’s omnipotence; and while he is an outlier in Jewish thought, his deterministic point of view would not be out of place in contemporary philosophy. Advances in neuroscience and genetics have led many to argue that the brain, and the choices it makes, are subject to the laws of nature instead of the person’s own will. And undoubtedly there is so much of life that isn't under our control; the Mishnah reminds us that “against your will were you born… and against your will you will die.” We know that much of what occurs in our lives is predetermined.

Many Jewish texts grapple with the fine line between free will and determinism. The Talmud tells about an inventive response to determinism from the mother of a prominent rabbi. It says that “an astrologer told Rav Naḥman bar Yitzhak’s mother: Your son will be a thief. (In response), she never allowed him to uncover his head. She said to her son: “Cover your head so that the fear of Heaven will be upon you, and pray for Divine mercy.” He did not know why she said this to him. One day he was sitting and studying beneath a palm tree that did not belong to him, and the cloak fell off of his head. He lifted his eyes and saw the palm tree. He was so overcome by impulse that he climbed up and detached a bunch of dates with his teeth.” This passage, which serves as one of the halakhic sources for wearing a kippah, is a powerful response to the questions of determinism. Perhaps Rav Nachman’s future was foretold; but his mother found a way to outwit his fate. Your will may be too weak to overcome your horoscope; but then again there are always creative responses to evade a direct collision with fate.

Even with creativity and determination, there remain times when we are simply unable to change, when free will falls short. Rav Eliyahu Dessler explains that free will is not universal. Some of our good habits are so deeply ingrained that we cannot imagine acting otherwise; and there are bad habits that we don’t even perceive as bad, that we are unable to change. But on the battlefield between what in our lives is predetermined for good and for bad sits one point where the battle takes place; this spot is the “point of free will.” It is at that spot where the battle for change occurs.

Rav Dessler's idea of “the point of free will” is profound and nuanced. It affirms the centrality of free will, and the importance of personal initiative and responsibility; yet it also offers greater understanding of those who are morally unlucky, whose bad behavior may be a product of their genetics and upbringing.

This idea is particularly significant in the realm of education. A particular student's temperament is critical to how they are educated; the challenge is to find that point where the student can choose to learn and grow. To treat the classroom as an assembly line is a mistake and will only frustrate the students whose capabilities differ from others.

Esav may have been a victim of this misunderstanding. Perhaps his parents misjudged his temperament, and assumed that he could readily overcome inborn defects and deficits. Rabbi Samson Raphael Hirsch writes in an essay that “had Isaac and Rebecca studied Esav's nature and character early enough, and asked themselves, how can even an Esav, how can all the strength and energy, agility and courage that lies slumbering in this child be won over to be used in the service of God … then Jacob and Esav, with their totally different natures could still have remained twin brothers in spirit and life; quite early in life Esav's "sword" and Jacob's "spirit" could have worked hand in hand…”

Rabbi Hirsch is arguing for us to understand Esav, to educate him for who he is. We certainly need to be concerned that maybe he consigns Esav to vocational school too quickly; and of course, when a teacher assumes a student cannot learn, it becomes a self-fulfilling prophecy. But those possible mistakes should not prevent us from grappling with the challenge with which Esav confronts us. There are many people with inborn shortcomings; how do we help them find the right point where they can grow and flourish? How do we find a meaningful place for them in our schools and communities? These people carry the burden of struggles far larger than anyone can imagine. May God grant us the wisdom and creativity to help them find their way.