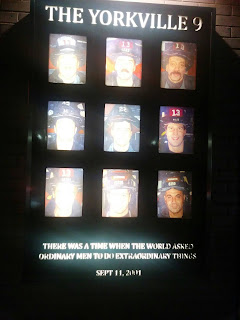 9/11 was an American tragedy. Terrorists struck a blow at the heart of our country and murdered 2,977 people. This attack was an assault on all Americans and brought heartbreak to countless thousands of bereft parents, widows and orphans. The victims were traveling in airplanes or sitting in their offices, supporting their families and pursuing their dreams. As President Bush put it, “Thousands of lives were suddenly ended by evil, despicable acts of terror." On 9/11, the forces of evil took the lives of thousands of good people.

The perpetrators of these attacks "are like chaff that wind blows away" (Psalms 1:4), and will be remembered only to be condemned and despised. But we will always remember the heroes of 9/11, the first responders who rushed in to save those who were stranded and injured; we will remember those who ran into the Twin Towers when everyone else was running out. So many of these heroes made the ultimate sacrifice in order to help others. The fire station just a half a block away from our synagogue, FDNY Engine 22, lost nine firefighters on 9/11. On the outside of the station there is a permanent memorial with their pictures, a tribute to the “Yorkville Nine” with the caption “There was a time when the world asked ordinary men to do extraordinary things.” And we will always remember our heroes who did such extraordinary things.

Heroism does not grow in a vacuum; heroes are shaped by their upbringing and education. Samuel and Pearl Oliner based their landmark study, The Altruistic Personality: Rescuers of Jews in Nazi Europe, on interviews with nearly 700 non-Jews who saved Jews during the Holocaust. (Samuel had a personal interest in the topic; as a 12-year-old, he himself was saved by a Polish peasant woman). They found that the rescuers were most often influenced by their parents. These altruistic, loving parents were role models with a strong sense of morality. Further studies on the Rwandan genocide have had similar results, and it is clear that culture and training are critical in the cultivation of heroism.

The early life of Moshe follows a similar pattern. Even though the Egyptians demanded that Jewish parents throw their baby boys into the river, Moshe's parents refused to do so, and hid him instead. Even when they could no longer hide him, his parents did their best to protect him in the river, by placing him in a miniature boat; while his sister sat and watched over baby Moshe. His own family’s actions left its mark on Moshe, who even at a young age stepped up to protect the lives of others; and Moshe learned his first lessons of heroism at home. Heroes are raised to be heroes.

I am afraid that America has forgotten how to produce heroes, because we're confused about what a true hero is.  Rabbi Joseph B. Soloveitchik writes in the essay Catharsis that there are two models of heroism: classical heroism, which is found in Greco-Roman literature, and biblical heroism. Classical heroism is aesthetic, dramatic and theatrical, demonstrating outward feats of strength that elicit the cheers of the crowd. But the biblical model of heroism is about character; it is about the person’s self-control, even self-negation, in the service of a higher cause, and their willingness to move forcefully in the pursuit of morality. The biblical hero works in anonymity and doesn't care to be famous.

What type of heroes do we embrace today? To put it bluntly, our children's role models are not true heroes, and we live in a culture which is obsessed with celebrity, where wealth is worshipped, and fame is honored. Open any tabloid or glossy magazine; they feature athletes, actors and the A-list financial elite. We are fooling ourselves if we ignore the damage this does. We are reorienting an entire generation's vision of what is meaningful and heroic. Ben Stein, who used to file a weekly report on the celebrities he would run into in Los Angeles, stopped doing so in 2005. In his final column he wrote the following, which is worth quoting at length:

We put couples with incomes of $100 million a year on the covers of our magazines. The noncoms and officers who barely scrape by on military pay...are anonymous as they live and die...I am no longer comfortable being a part of the system that has such poor values...

There are plenty of other stars in the American firmament. The policemen and women who go off on patrol in South Central and have no idea if they will return alive. The orderlies and paramedics who bring in people who have been in terrible accidents and prepare them for surgery. The teachers and nurses who throw their whole spirits into caring for autistic children. The kind men and women who work in hospices and in cancer wards.

Think of each and every fireman who was running up the stairs at the World Trade Center as the towers began to collapse.

Now you have my idea of a real hero.

We need to embrace the idea of biblical heroism again, before it gets forgotten. Real heroes are people of character, not characters on TV. Real heroes wear uniforms, not couture. Real Heroes are too busy helping others to post selfies on Instagram.

Real heroes often toil in anonymity. One of the heroes of 9/11 was first known as the man in the red bandana. He wore a red bandana over his face to protect himself from the smoke, as he helped dozens of people exit the building. He was credited with saving 18 lives. It was only after reading newspaper stories about him, and contacting survivors, that his parents found out that the stories were about their son; he was Welles Crowther, 24-year-old equity trader and a volunteer fireman. And like so many other heroes, he learned to serve others as part of his upbringing; his father was a volunteer fireman, who had inspired his son’s choices. The red bandana was a tradition he learned from his father as well; he had carried one since he was a 7-year-old child, when he got a red bandana as a gift from his father.

Will America be able to produce heroes like Welles Crowther anymore? Twenty years after 9/11, we need to think seriously about this question. It takes determination to raise real heroes, and in order to do so, we need to build a culture of courage, compassion and moral vision.