Between Karl S. and Pharaoh: A Meditation on the Limits of Grace 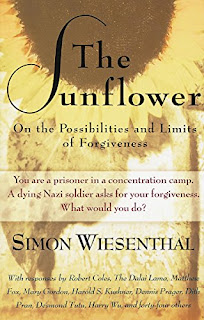 Can one forgive the unforgivable? This is a question posed by Simon Wiesenthal in his book The Sunflower. During the Holocaust, he was interned in a small concentration camp near his hometown of Lemberg. One day, he and the other prisoners were brought in to clean out the medical waste from a makeshift hospital; the hospital was actually housed in the technical high school that Wiesenthal had attended. A nurse pulls him away from the other prisoners and brings him to Karl, a 21-year-old SS officer who had been injured in battle and was on his deathbed. A year earlier, Karl had taken part in an atrocity in the Ukraine. Hundreds of Jews were crammed into a house, and then he and his comrades threw grenades into the house until everyone inside was dead. Karl describes the anguish of his victims; guilt ridden by the mental images of the torture he inflicted, he turns to Wiesenthal and asks him for forgiveness on behalf of the Jewish people.

Wiesenthal is uncertain how to respond to Karl, and remains silent. He returns to his fellow concentration camp inmates, and that night they debate what he should have done. The Sunflower, which was published in 1969, is Wiesenthal’s account of his experience, along with responses from multiple theologians and intellectuals.

Many of the responses disagree, and at the heart of the disagreement is a simple question: Can this mass murderer ever be forgiven? Some argue emphatically for the importance of forgiveness. Cardinal Franz Koenig, the Archbishop of Vienna, writes that "This was an opportunity to put forward an act of almost superhuman goodness in the midst of a sub-human and bestial world of atrocities." Father Edward A. Flannery, a Rhode Island Priest who was a leader in Catholic-Jewish dialogue, went much further. In the 1976 edition of the book he wrote: "While conscious of the vast differences in the respective situations and culpabilities involved, we may ask whether Wiesenthal and his advisers did not themselves participate in Karl's sin." Yes, Flannery is saying that Wiesenthal’s refusal to forgive Karl is a sin! (He omitted this sentence in a revised essay for the 1998 edition.) On the other side is the view of those who see forgiving a horrific crime as a crime in itself, something that perverts the concept of justice. One proponent of this view is the author Cynthia Ozick, who ends her essay with the following words:

Let him go to hell.

Sooner the fly to God than he."

Wiesenthal's dilemma engenders intense debate because it sits at the fault line of two theological concepts: justice and repentance. To extend forgiveness to a mass murderer is an injustice; by offering him your grace, you disrespect his victims. At the same time, it is impossible for us to turn our backs on repentance. Ezekiel reminds us that this is what God wants of sinners: “As surely as I live, declares the Sovereign Lord, I take no pleasure in the death of the wicked, but rather that they turn from their ways and live.” The value of repentance is intuitive; all humans make mistakes, and all of us must overcome our failures. Without a second chance, we would sink into the abyss of moral failure.

Justice and repentance both make sense. Justice represents our way of restoring moral order to the world, and the criminal must be punished even if they are apprehended years later. But repentance is also part of the moral order. Rav Soloveitchik explains that the forgiveness bestowed upon a Baal Teshuvah, a penitent, is more than an act of divine grace. The Baal Teshuva has transformed his identity, and deserves to be judged according to his new reality.

It is precisely for this reason that justice and repentance are at a tension with each other. Repentance looks at a snapshot of the person’s soul, and who they are today. Justice looks at the totality of a life, and all actions, past and present, are judged equally. Both lay claim to our sense of right and wrong; the Baal Teshuvah deserves our respect for what they have become, yet the criminal deserves to be punished for what they have done. We can overlook this contradiction in ordinary lives, with ordinary transgressions. But when a mass murderer decides to change his ways, the contradiction looms large, and that is why Wiesenthal is stymied by Karl’s request.

Perhaps the best response to Wiesenthal's dilemma was written 750 years before the Holocaust. Our Torah reading tells us that during the ten plagues, God hardened Pharaoh's heart and didn’t allow him to change his ways. Maimonides struggles with this narrative. Free will is a foundation of Judaism; if so, how could God take away Pharaoh's free will? Maimonides answers that Pharaoh and others like him are so evil that God punishes them by preventing them from repenting.  There is a limit to how far repentance extends, and Pharaoh, Karl, and their ilk are undeserving of repentance.

When I first read The Sunflower, my intuitive reaction was that Simon must not forgive Karl; I feel the same way now. The horror of the Holocaust is so overwhelming that the thought of extending forgiveness for any of its perpetrators is impossible. This is very much in line with Maimonides, who reminds us that easy forgiveness will ultimately undermine the cause of justice.

However, this simple answer is not so simple. Maimonides is not the final word on this question. Many other commentaries, such as Seforno, defend free will, and assert that Pharaoh could have repented. To assert justice unequivocally has costs as well, because we would then lose our own sense of forgiveness and generosity, and with it, our humanity. In the end, the dilemma of Pharaoh’s heart remains without a satisfactory solution, because we cannot live in a world without justice, and we cannot live life without repentance.