What Miracle Workers Can't Do: A Donkey's Perspective 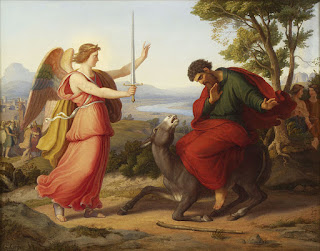 They arrive from Israel every week, with bold notices in Jewish newspapers; "evil eyes removed! only 50$. Major credit cards accepted". They are the miracle workers, Rabbis and Rebbetzins who can magically change your life. These ads are seductive, especially when you find yourself needing a change of luck; and they have a veneer of authenticity because Judaism does accept that prayer matters, and the prayers of righteous matter. But these miracle workers don't offer a sincere prayer; instead, they sell spiritual voodoo. Sadly, many chase these blessings, assured by anecdotes and advertising.

This desire to gain control of God's plan is an old one; and a lengthy section of the Torah, Parshat Balak, is devoted to rebutting this primitive theology, the belief that God can be bought off with a few sacrifices or mystically rewritten Ketubah. In Parshat Balak, a powerful seer, Bilaam, is asked to curse Israel, in hope of defeating them. In turn, as much as Bilaam desires to curse Israel, he cannot. Even though "whom he blesses is blessed, and whom he curses is cursed", Bilaam still finds himself unable to do anything but bless Israel. The lesson is simple: man cannot control God. Man cannot dictate to God who to bless and curse.

This lesson is woven into one of the literary themes of the parsha. There is an enormous amount of animal imagery. We names that evoke animal life: Balak the son of Tzippor ("bird") Bilaam the son of beor (sounds like "livestock"). We have imagery of an ox licking up the grass of the field, and the image of covering the face of the earth (like locusts - cf. Exodus 10:4). And above all, we have Bilaam's donkey. This is no ordinary donkey; Bilaam's donkey is a talking donkey.

The donkey refuses to listen to Bilaam. Bilaam whips the donkey, hoping to beat it into submission, but the donkey freezes. Eventually, the donkey speaks, and tells Bilaam that it had always been loyal; but this time, the donkey was answering to a higher authority: God.

“The ox knows his owner, and the donkey his owner’s trough”.(Isaiah 1:3). The animal imagery in our Parsha emphasizes that the animal has a subordinate status, one we expect it to play. But man needs to understand that he has a similar role to play, to be loyal to God, rather than trying to manipulate God to follow his own wishes. Bilaam tries to “lead” God, to decide who gets blessed and who gets cursed. The donkey’s lesson is this: humans are meant to serve their own master, God,  as well the donkey serves his. (Parenthetically, another character in the Bible, who wakes early to saddle his donkey, Avraham, does so in order to loyally follow God’s order, not to defy them).

The miracle working “Rabbis” who advertise cures are hucksters, pure and simple. But even worse than their deception is the upside down theology they offer. They tell their supplicants that God might ignore them, but that a small fee, the Rabbi can get God to “change” His mind. This is exactly what Bilaam said, and it is an inversion of what Judaism is all about. in the end, the donkey teaches us the fundamental lesson of Judaism: We are here to serve God, not to have God serve us.

Posted by Rabbi Chaim Steinmetz at 9:41 AM