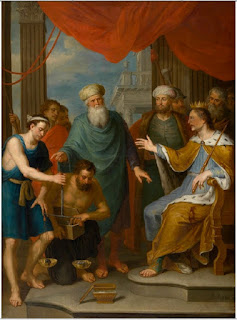 Ambivalence has a bad reputation for very good reasons. It is associated with fear and failure, the Hamletesque desire to deliberate rather than decide. On the battlefield, an ambivalent soldier is a dangerous liability; in a relationship, ambivalence erodes commitment, and pulls the couple apart. It is difficult to be decisive, because every decision carries risk; but strong leaders need to be courageous, and push forward anyway.

Our Torah reading offers a different picture of ambivalence. Every commentary wonders: what was Yoseph's plan after meeting his brothers? Over the course of five chapters, we watch an unusual plot unfold, a long and twisting narrative that resists interpretation. Multiple commentaries labor strenuously to organize Yoseph’s actions into a coherent plan. Perhaps Yoseph was motivated by vengeance. Perhaps he was testing the brothers to see if they had changed. Perhaps he wanted to bring Binyamin to live with him in Egypt. Or, as the Ramban suggests, Yoseph felt compelled to fulfill his childhood dreams, and was manipulating his family in order to bring his father and brothers to Egypt and bow to him.

These competing theories arise because Yoseph’s behavior is so perplexing; there is no obvious motivation for his actions. Yoseph constantly vacillates. At times he is a harsh Egyptian viceroy prosecuting suspected spies; at other times, he is a kind brother who releases them from jail, overfills their bags, and returns their money.  On their second visit, Yoseph invites the brothers for a meal in his home and gives them gifts, and returns their money once again; at the same time he frames Binyamin as a thief. During each visit Yoseph is moved to tears by his reawakened love for his brothers; but he immediately turns aside and covers up the tears. Yoseph is the very picture of a man torn in two.

I would argue that ambivalence is the best explanation for Yoseph’s behaviour. Surprised by his brothers, Yoseph found himself of two minds, uncertain which direction to take. Emotionally, he felt both rage at, and love for, his brothers. More significantly, with the brothers arrival, Yoseph’s social standing was threatened; the powerful Egyptian viceroy was afraid of being exposed as a Hebrew, who were despised by Egyptians.

Yoseph was the first crypto-Jew, a hidden Hebrew in the court of Pharaoh. During the nine years that he was in power, Yoseph made no attempt to reach out to his father Yaakov. The simplest explanation for this is the most obvious one: Yoseph didn’t want to reunite with his father, and preferred to leave his past behind. David Henschke points out the Midrash Tanchuma, which remarks that Yoseph settles right in when he arrives in Egypt, and proudly forgets his father’s home. Yoseph’s desire to burn bridges with the past is reflected in the name of his first-born Menassheh, which means “God has made me forget my hardship and my parental home.” And forget is exactly what Yoseph does. When interpreting Pharaoh’s dreams, he confidently says “as for Pharaoh having had the same dream twice, it means that...God will soon carry it out”, oblivious to the fact that thirteen years earlier, he himself had also had the same dream twice, yet nothing happened. Yoseph left behind a traumatic childhood, and replaced it with amnesia and affluence.

Then the brothers arrive, and Yoseph is confronted with repressed memories. He is torn between his desire to protect his status and an unexpected longing for his family. Now he wants to take two opposing courses of action at the same time; he wants to remain anonymous, yet at the same time ensure that the brothers keep returning to him. Yoseph betrays his inner worries when he charges his brothers with being spies; like spies, his brothers know sensitive secrets about him. And so Yoseph vacillates, sometimes speaking like an Egyptian, and at other times like a Jew. He takes an oath to Pharaoh’s life, and declares that his goblet was used for divination, a pagan practice forbidden by the Torah. At other times, when he is more compassionate, Yoseph speaks about how he fears God. Yoseph alternates between the theological language of Egypt and Israel.

The perfect metaphor for Yoseph’s  split identity is found in the eating arrangements when he shares a meal with his brothers. The Hebrews and Egyptians sit apart, per Egyptian custom, which treats Hebrews as inferior. But Yoseph sits alone, in a no man's land between the Egyptians and the Hebrews, unable to eat with either. Yoseph is ambivalent, uncertain if he belongs with Egyptian royalty or with his brothers.

Yet it is precisely because of this ambivalence that Yoseph can reunite with his family. After nine years in power, after twenty-two years apart from his family, Yoseph refuses to make the quick decision to send his brothers away. Yes, Yoseph’s ambivalence is turbulent and frightening; but it is also constructive, and sets the stage for an exceptional conclusion to the story. For Yoseph, ambivalence is the way-station on the road to repentance.

Ambivalence can be constructive. Hesitation, deliberation, and vacillation are often the first stops on the road to personal change. Transformation begins when a person accepts a new perspective; most of the time, that only happens gradually. Before making a change, people will hold more than one point of view at the same time, and jump between them. Ralph Waldo Emerson, when critiquing thoughtless conformity, said "a foolish consistency is the hobgoblin of little minds, adored by little statesmen and philosophers and divines. With consistency a great soul has simply nothing to do." There is a limit to the value of decisiveness; it can often hold people back from solving problems and considering new possibilities. Without ambivalence, change is often impossible.

In a leadership driven culture like our own, ambivalence seems weak and cowardly, the product of passivity and procrastination. We respect quick and clear decisions, and the Mishnah’s recommendation ‘to be slow to judgment” seems too wishy washy. And sometimes it is. But sometimes it isn’t; and the value of ambivalence is that it offers an opportunity to consider alternatives, resist conformity, and embrace innovation. Yoseph teaches us that change is only possible when a person is unafraid to be of two minds.