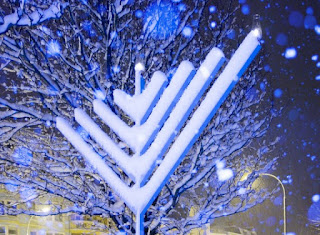 Winter brings a shiver to the soul. It is the season of hibernation and stagnation. The nights are longer, the air is frigid, and there are moments when the world feels unforgiving, dark and dreary. Winter can very easily become a season of discontent.

Both Judaism and Christianity have holidays right around the winter solstice, and both holidays have thematic connections to the season. In a remarkable passage in the Talmud (Avodah Zarah 8a), we are told about the origins of Saturnalia, the pagan predecessor to Christmas.  Adam, the first man, sinned and was thrown out of the Garden of Eden. It was fall, and he noticed that each day became progressively shorter and colder. Adam began to worry that "perhaps because I sinned the world is becoming dark, and will return to chaos and disorder." He fasted and prayed to be spared; and then the solstice arrived, and the days got longer. Adam, overjoyed with the realization that winter is not the end of the world, established a holiday to thank God. However, this initially well-meant holiday was eventually appropriated by pagans for idol worship. The Talmud teaches us that passing the winter solstice has a spiritual message: light will return, and man, despite his flaws, will be delivered from his distress. Winter is not endless, nor is it the end.

This message is transformative, because belief in a better future makes us more resilient. In a famous 1957 study, a professor at Johns Hopkins University, Curt Richter, tested the resilience of wild rats. Richter placed the rats in a bucket of water to see how long they would swim before giving up. Most would drown within 15 minutes. However, if the rats were “saved” by being taken out of the water before they would drown, they would swim for increasingly longer periods of time, and could continue swimming up to 60 hours. The possibility of being saved made the rats more resilient.

Hope is more than a warm fuzzy feeling; it provides all living beings with greater strength and determination. And each winter, as we pass the solstice, we learn to hope again.

But it is here where Chanukah's message is different. It tells of another type of hope, one that doesn’t depend on the memory of deliverance. Chanukah teaches us that the greatest miracles are products of the soul, which is strong enough to persevere even in the darkest moments. Rabbi Tzvi Elimelech of Dinov notes that Chanukah arrives just before the solstice, on the darkest, most hopeless night of the year. This is because the triumph of the Maccabees is a triumph of inner hope, of finding inspiration when none is apparent. The Maccabees should have given up before they started. How could a small group of men take on a powerful empire? What kept the Maccabees going was their own inner light, a refusal to despair despite the overwhelming odds against them.

The spirit of Chanukah can bend reality. Natan Sharansky tells of one Chanukah in the gulag when the guards confiscated his improvised Menorah. Sharansky declared a hunger strike; in an attempt to avoid bad publicity, the commanding officer in the camp, Major Osin, allowed Sharansky to light Chanukah candles in his office. As Osin stood by, Sharansky improvised this Hebrew blessing: "Blessed are You, God, for allowing me to rejoice on this day of Chanukah, the holiday of our liberation, the holiday of our return to the way of our fathers. Blessed are You, God, for allowing me to light these candles. May you allow me to light the Chanukah candles many times in your city, Jerusalem, with my wife, Avital, and my family and friends.” Then, Sharansky added, "And may the day come when all our enemies, who today are planning our destruction, will stand before us and hear our prayers and say 'Amen.'" Osin, hearing the end of the blessing, politely added in "Amen." While it would take many years before Sharansky made it to Jerusalem, this too was a Chanukah miracle: one courageous man so determined to hold on to his Judaism, that he managed to enlist a KGB Major to pray for his emigration.

Chronologically, Chanukah is the final holiday in the Jewish calendar - the last one established before the destruction of the Second Temple. It arrives at a moment when miracles are few and the Divine Presence is hidden; and it teaches a lesson for an age when deliverance is improbable. For much of the last 2,000 years, Jewish history has been an endless winter, a hopeless, barren terrain of exile. Yet, during this time, there has been an ongoing miracle of faith, the spirit of a remarkable people who never lost hope. And on the darkest night of the year, Chanukah reminds us of a hope that requires no promises, just the miracle of perseverance.