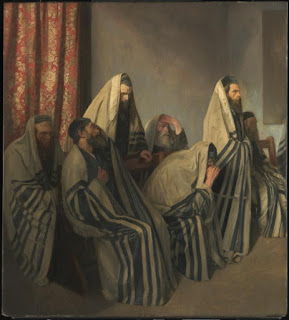 There's an old Jewish joke that asks: what is the difference between a Jew and a Frenchman at a party? A Frenchman leaves and never says goodbye, but the Jew says goodbye and never leaves.

This joke is more than a joke; it actually is a pithy statement of Jewish theology. The holiday of Shemini Azeret is quite strange. It is the 8th day of Sukkot, which itself is unusual; this makes Sukkot one day longer than its sibling holiday of Pesach. This 8th day of Sukkot is also peculiar because it has neither of the Sukkot rituals, Lulav and Sukkah. How does one make sense of Shemini Azeret?

Rashi offers an explanation. He explains that Shemini Azeret is not part of the original design for Sukkot, and is meant to be seen as an extra holiday. He writes that:

“..It is similar to the case of a king who invited his children to a banquet for a certain number of days. When the time arrived for them to take their departure he said, “Children, I beg of you, stay one day more with me; it is so hard for me to part with you!”

Rashi’s explanation makes intuitive sense. Shemini Azeret marks the end of the pilgrimage festivals, when all of the nation came to visit the Temple, and it is the end of the Tishrei holidays, which after the destruction of the Temple, became a time of unique connection to the synagogue. With Shemini Azeret, the holiday schedule comes to a close; this eighth day of a seven day holiday represents a bittersweet final farewell to the holidays.

However, the Midrash itself is problematic. It says that a day is added to Sukkot because it is difficult to say goodbye. But how will staying one more day make it easier to say goodbye? The problem of saying goodbye will come back the next day! For an example of this, at the end of the Book of Judges there’s a narrative in which a man continually asks his son-in-law to stay for one more day, because he can't bear having him leave. All that staying one more day will do is postpone the difficulty of saying goodbye.

I think this Midrash is making a different point. By staying one more day beyond the end, we have demonstrated a significant truth: the end is not the end. With an extra day, the last day of Sukkot is no longer the last day of Sukkot. Shemini Azeret is actually an attack on the very notion of endings.

And Jews don't believe in endings. Our notion of time is founded on the understanding that a timeless being created the world; therefore, a concept of time with rigid beginnings and ends is impossible. For those whose greatest aspiration is to have an experience of the infinite, the constraints of time, with its beginnings and ends have a very different meaning.

This inability to accept endings is very much a part of Judaism’s DNA. On Simchat Torah we will be concluding our yearly reading of the Torah; yet immediately, almost compulsively, we must start reading the first book of the Torah, the Book of Bereishit again. The Torah might have a final chapter but it has no end. We will return, and return again and again to the Torah.

Jewish history also has no end. Jews have refused to accept the dignified burial that so many demanded of us. We have managed to survive, revive and thrive, to the confusion of the pundits and the frustration of our enemies. Every time it looked like there was an end to Jewish history, there was a new beginning, even more remarkable than the previous one.

At Yizkor, we also refuse to accept an ending. Our hearts are sometimes overwhelmed by the thought that עלי קשה, how painful it is to be apart from those we have loved; but we take comfort and consolation in knowing that there is no true end, and their spirit still remains with us.

When a baby is named after a family member who has just passed away, you can see an unusual look on the family’s faces when the name is announced; they are crying and laughing at the same time. They are crying because  עלי קשה,  it is so difficult not to have those we love with us. And yet they smile, because it as a moment of עַכְּבוּ עִמִּי עוֹד יוֹם אֶחָד , in which the final chapter gets rewritten. The ending is now no longer an ending, but the beginning of a new chapter. A baby naming is a moment of true timelessness.

Today we say yizkor, and we remember a past that is not yet a past.

We remember those whose impact on our lives very much remains with us.

We remember those whose names and whose legacies are being carried by the next generation into the future.

And as we say Yizkor, and shed a tear for those when we desperately miss, we do something that is deeply Jewish: we refuse to let the end be the end.