An Unusual Profile in Courage: The Ma'apilim 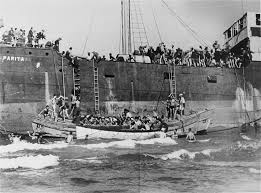 It was in this context that Aliyah Bet was born. Initially, it was a matter of debate in Zionist movement. Ze'ev Jabotinsky wrote an essay entitled "On Adventurism" in 1932 chastising the Jewish Agency for following the British imposed rules. But in 1937, the Peel Commission handed down a recommendation to limit immigration to 12,000 Jews per year. In response to this draconian recommendation, the underground Mossad L'Aliyah Bet was established, to support “illegal immigration”. Actually, that is what the British called it; for Jews, returning to the Holy Land was not immigration, but rather a return home, and certainly not illegal, no matter what the Mandatory authorities called it. An estimated 100,000 Jews managed to enter Mandatory Palestine during the War and immediately afterwards.

Those who made the trip took on immense risks. On February 24, 1942 the Struma, a ship sailing from Romania with 800 Jewish refugees, was torpedoed in the Black Sea by a Soviet submarine. There was only one survivor.

Even those refugees that managed to get to mandatory Palestine were often jailed. Some were imprisoned in Atlit or Cyprus, while in 1940, nearly 1600 refugees were sent to Mauritius in the Indian Ocean; they spent nearly 5 years there.

Aliyah Bet is a heroic chapter in Jewish history. But what is fascinating is the Hebrew word given for the illegal immigrants: "ma'apilim".

This word comes from our Torah reading. After the sin of the spies and the decree that the Jews would spend 40 years in the desert, there is a group that decides on their own to enter the Land of Israel. The word used by the Torah to describe what they did is Vaya'apilu, which is translated by various commentaries such as Saadia Gaon, Seforno and Shadal as stubbornness, arrogance, and impulsiveness.

So how did this pejorative term, Vaya'apilu, end up being used for the courageous refugees of the pre-State era?

Rav Elchanan Samet grapples with this question in his second series of Iyunim b'Parshiyot HaTorah. But part of the answer would seem to be obvious. While the ma'apilim are defying God's command, they had also overcome a character failing the generation of the desert had. The ma’apilim are the first group in this generation to show courage, and that represents a significant transformation.

And that courage will make a permanent difference as well. Samet quotes an inspirational passage in Rav Tzadok's Tzidkat HaZaddik (46). Rav Tzadok talks about the chutzpah of the ma’apilim. He explains that Chutzpah will eventually be important, as the Talmud says it will be necessary in the times of the Messiah. And when the Torah says about the attempt by the Ma’apilim to enter the land, "והיא לא תצלח", “this effort will not succeed”, it hints that on another occasion in the future, a stubborn attempt to enter the Land of Israel will be successful.

Rav Tzadok, who died in 1900, was anticipating heroism that would happen decades after his death. He predicted there would be a time when the Jewish people would reverse the meekness of the spies with acts of bravery. And on overcrowded ships that were barely seaworthy, the descendents of the wandering slaves in the desert proved themselves worthy of their own home in their own homeland. Finally, the ma’apilim came home.

Faith combined with courage gives us the ability to face all of our challenges. May we be fortunate enough to find both during these trying times.


Posted by Rabbi Chaim Steinmetz at 10:06 AM

Thank you for your inspiring words on this parsha. Best wishes for a Shavua tov to all