Lag B'Omer and Seeing the Unseen 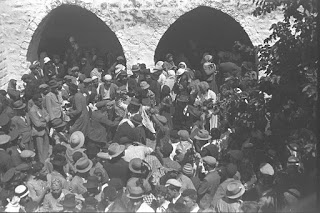 Our Lag Baomer is a tepid affair in which we omit the tachanun prayer and send the students out on a field trip at school.

But the Lag Baomer of Meron (a small village in northern Israel) is very different. Chava Seltzer, an American immigrant who visited Meron in 1920 writes:

“And the eve of the holiday has arrived, and on the road going up to Meron, crowds of men, women, and children; some are riding donkeys and some are on foot. Here is a group of Yemenites in their unique clothes, some Bukharim, some Ashkenazim, and here is also the big eye-catching group - a group of Yemenites from Damascus, wearing Arab clothes and galloping on their horses, all of them wearing weapons: pistols, swords and lances…”

In actuality Lag Baomer has two different meanings. For most of us, it is a day of respite during the mourning period of Sefirah. Until Lag Baomer we mourn the loss of the students of Rabbi Akiva, which many theorize took place during the Bar Kochva rebellion. Lag Baomer is the day in which the deaths stopped, and on it we celebrate the end of grief.

Today the celebration in Meron is a spiritual carnival. Tens of thousands flock from all around Israel. It is filled with people singing and dancing, eating and drinking. Others praying intently, for desperate needs and divine miracles.

The Meron celebration brings with it unusual practices. There is a custom to give 18 Rotel of alcoholic beverages, roughly 54 liters, for the celebration of the crowd. Boys aged 3 have their upsherin, their first haircut, in Meron that day. And at midnight the bonfire is lit. People throw expensive garments into the oil to be burnt with the bonfire. The right to light the main bonfire has been given to a rabbi who comes from the Rizhin dynasty, but many other rabbis light other bonfires as well. The Lag Baomer of Meron is a surreal mix of Purim and Yom Kippur,a mixture of tears and laughter, solemnity and silliness.

Yet every aspect of the Lag Baomer story raises questions.

And finally, why would we celebrate the date of Rabbi Shimon bar Yochai’s death? This riddle was particularly perplexing, because for centuries there was a custom to fast on a yartziet, on the anniversary of a death; Rabbi Moshe Sofer and Rabbi Joseph Saul Nathansohn, two renowned Rabbinic authors, found the idea of celebrating an anniversary of a death too strange to accept.

Lag Baomer is a grand celebration with an uncertain foundation.

But that may very well be the point. It is a holiday to see the unseen.

Someone just reminded me of a line in The Little Prince that says:

“Here is my secret. It is very simple: It is only with the heart that one can see rightly; what is essential is invisible to the eye.”

That is the foundation of Lag Baomer. Much like the poetry of Midrash and the insight of Kabbalah, there is another way of seeing reality, grounded in imagination, potential, and vision. And that is what Lag Baomer celebrates.

When seeing the world through Lag Baomer eyes, an unknown mountain can be a new Mount Sinai, the death of a great man can bring illumination to the world, and after hiding and running, an exiled people can find their way.

Lag Baomer teaches us to see differently, and to look beyond darkness and beyond dejection.

In the last century Lag Baomer has been an inspiration to two very different groups who seek redemption. It inspires mystics looking for a way to bring the soul out of its exile in this material world. But it also has inspired those who wanted to bring Jews out of their exile in the material world.

For Zionists, Lag Baomer is also about seeing the unseen. They saw Lag Baomer as a way of completing the rebellion of Bar Kochva, and seeing within what was once a historic defeat the possibility of a future victory.

For this reason Zionist youth organizations sponsored Lag Baomer events, with archery contests and long hikes. They were building a new generation that would return to the land ready for whatever challenges might arise. Yes, they were pursuing what Theodor Herzl would refer to as “a fairytale”. But they were inspired to see unseen, and to find a way to bring the fairytale to life.

In 1949, the first Lag Baomer after The War of Independence, Meron was filled with the representatives of the Israeli government and Israeli army. Just a year earlier there had been a dramatic battle in Tzefat and Meron, and the local community was overjoyed that they were now part of the State of Israel. Rav Yehuda Leib Fishman, the Minister of Religion for the new Jewish State spoke, and lit the torch for the bonfire. The newsreels of Lag Baomer1949 show groups of soldiers singing and dancing, carrying a Torah came to join in the festivities at Meron.

The participants in 1949  knew that Jews had long been inspired to see the unseen on Meron; but that year, they could see a miracle with their own eyes.

Lag Baomer that year had come to life.