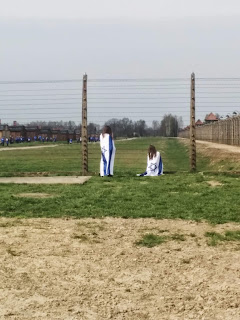 I had a dispute with a friend of mine a few years ago. I had just given a sermon that included an inspiring story that took place during the Holocaust.

My friend, who was a survivor of the Holocaust, came over afterward and said to me: “Nothing about the Holocaust was good. Don’t make it sound so positive.”

And he was right.

There is good reason to believe that remembrance of the Shoah can only be expressed in mourning and grief. Lawrence Langer, in his book Preempting the Holocaust, critiques those who find “positive lessons” in the Holocaust. He cites an incident at Matthausen, when a group of Jews were thrown into a pit of quicklime, and shouted for hours as they died an agonizing, slow death. Langer concludes that “Nothing we hear from well-intentioned commentators about….. the light of human community emerging from Holocaust darkness….or "fellowship of the suffering and the long suffering"... can silence the cries of those hundreds of Jews being boiled to death in an acid bath.”

Langer is correct. The 6 years of the Holocaust are an enormous black hole of barbarity, an inexplicable horror that one can mourn, and only mourn.

But let me explain why I think I am right as well. There is another side to remembering the Holocaust, because memory can focus in more than one direction.

Rav Soloveitchik speaks about this idea in lectures on the Haggadah. He notes there are two statements in the Haggadah that seem to say the same thing in different ways:

“If the Holy One, Blessed Be He, had not brought our ancestors out of Egypt, then we, our children, and our children’s children would still be enslaved..”

“In every generation one must view oneself as though one had personally left Egypt..”

These two perceptions of the past are actually quite different. In one, we see ourselves as if we left Egypt, and in the other, we see ourselves today as people whose current situation is directly influenced by the Exodus.

“Microscope time” focuses completely on one narrow moment. What did it feel like the night we left Egypt? What is the experience of a year in Auschwitz like? Like a microscope, this perspective of time looks at one moment only.

“Telescope time” takes a broader view. It looks at an event and considers: What is the meaning of this event in the course of a life, of a history? What perspective do we take after a life of 70 or 80 years? How do you describe the historical experience of an entire century?

Like a telescope, this perspective of time focuses on a large area of time, and looks beyond the moment to consider the past, present and future at once.

Even on the darkest days of the calendar, we never lose the perspective of “telescope time”. The Orchot Chaim (R. Aharon ben R. Jacob ha -Cohen of Narbonne, France, early 1300’s) states that even for Tisha B’Av, which focuses on the tragedies of the past, we need to lessen the mourning in the afternoon, because we always keep an eye on the future. He writes:

“The ancient custom is for the women to wash their heads on the late afternoon of Tisha B’Av, and the elders of blessed memory who instituted this (counter- halachic) custom did so on the basis of the fact that the Aggadah says that Messiah will be born on the 9th of Av. And just like we make a commemoration for the destruction, so too we make a memorial for the redeemer and consoler; and this is done so we never lose hope for a future redemption.”

This is an eloquent statement of “telescope time”. We sit in mourning on the 9th of Av, yet never forget that there will be a future redemption. The Messianic future intrudes on the sadness of Tisha B’Av, and reminds us to remain hopeful and positive.

We know the reality of “microscope time” and “telescope time” from our own experiences.  When we are observing shiva and narrowly focused on mourning our loss, there are still times when we open up and see a larger picture, and smile and laugh at pleasant memories. And at weddings, when the couple focuses on their joy under the chuppah, reality still telescopes in, and with tears in our eyes we remember the people who are missing.

But when you see the Holocaust in terms of the last 71 years, there is another narrative.

So what would be the larger narrative of the last 71 years? In terms of world history, little has changed. Over and over political leaders have vowed “never again”; but that promise has proved false. Since 1945, there have been genocides in Cambodia, Rwanda, Bosnia and Darfur. Even Samantha Power, who writes eloquently about ending genocide, serves an administration that did nothing for the civilians of Syria. In the last 71 years, the world has not changed very much.

But in terms of Jewish history, things have changed dramatically. The Holocaust was the culmination of two millennia of anti-Semitism, and should have broken our spirits. Survivors should have given up hope, and world Jewry should have collapsed.

Yet nothing of the sort occurred. In the shadows of the concentration camps, orphaned survivors got married and started new families. The “bericha” sent ten of thousands of survivors to Israel, where many went directly to fight for the new state. And survivors around the world built communities, and garnered remarkable accomplishments in business, scientific and political life, including several Nobel Prizes.

Alongside the survivors, the Jewish world reenergized itself. After 1,900 years of exile, Jews returned to their homeland and built a state that is a world leader in multiple areas. The arc of Jewish history since the Shoah has been nothing short of miraculous, with a people rising from the ashes in a manner no one could have predicted.

On Yom Hashoah, we need to keep two perspectives in mind. Our first responsibility is to reflect on six years of carnage, and mourn the 6 million. But at the same time, we must be inspired by the remarkable story of the past 71 years, when the Jewish world was transformed by heroes who toiled quietly, home by home, community by community, to rebuild the Jewish world.

One excellent example comes from an obituary I read last year in a Canadian newspaper, The Globe and Mail. The paper has a column where friends can contribute significant obituaries about people who may not have been famous, but were important. After Pesach last year, an obituary appeared about Eta Birnbaum Chaim, 96. Eta had saved the life of her younger sister in Auschwitz, and then came to Toronto.

“Eta was deeply devoted to her religion and family, which included six grandchildren and six great-grandchildren…...Well into her 90s, she walked two kilometers each way to attend shul every Saturday. For five years, she walked the same distance, twice a day, to see Harry in Baycrest Hospital after he suffered a stroke….Last February, she chose to forego surgery when told she had an incurable tumor…..

She continued to prepare and host Shabbat suppers and made her best batches of gefilte fish and egg noodles for 35 guests at Passover, her favorite holiday. Eta took to her bed the following week and slipped gently away, whispering her Shema prayer with her family at her side, leaving a legacy of common values, uncommonly lived.”

Until the last seder, Eta made sure that the story of the Jewish people was told and retold. Because of wonderful women like Eta, Jewish history did not end with the Shoah, and because of her that we can say today “Am Yisrael Chai”.

Today, we are reciting Yizkor for people like Eta, who made a difference in a quiet way, with love and compassion. As we say Yizkor, there is one more thought I’d like to consider about “telescope time”, because the idea of telescope time solves a mystery about Yizkor.

How can we say Yizkor on a holiday; doesn’t it bring us to tears? A Yom Tov is meant to be a time of joy. We even suspend mourning in deference to Yom Tov; so how do we say Yizkor?

This question is cited by the Tzitz Eliezer (12:39) in the name of Rav Moshe Mordechai Epstein (the founder of the Chevron Yeshiva).

Perhaps the answer is this: seeing Yizkor through a “telescope” view of time is different. Yes, we cry during Yizkor; but we also can reflect recognize that while we feel a profound sense of loss, this pain we feel is the reflection of a true legacy. The person we grieve for continues to inspire us, and their legacy continues to live with us.

And even if we cry at Yizkor, there is still a feeling of appreciation for a life lived.

Seven months after my mother’s death, my niece gave birth to a baby girl; the baby was to be named on Shabbat morning. That Saturday night, we got a call informing us of the baby’s name. As expected, the name given was named Rochel; this baby was the first child to be named after my mother. I sat down in a corner and cried, overwhelmed by the twin realizations that my mother was both gone, but not forgotten. I cried for my loss, yet at the same time, took enormous pride in the legacy my mother had left us.

These tears are the tears of Yizkor, tears well suited even for the happiest of days. We cry, but at the same take pride in the legacy we have, a legacy that still lives on.

Posted by Rabbi Chaim Steinmetz at 11:40 AM