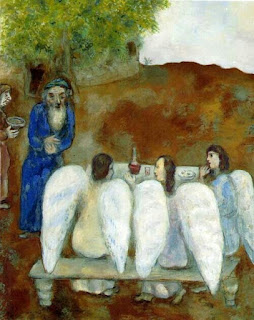 What is an angel? Mentioned throughout Jewish literature from the Bible onward, the existence of angels is both universally accepted and vaguely understood. Lurking in the netherworld between heaven and earth, the precise nature of angels is the subject of a fair amount of controversy. Are they independent beings, or manifestations of God? Do they have a physical image? Can they choose their actions, and perhaps even sin? Are they jealous of human beings? Is it acceptable to pray to angels?


Many of these questions are thrashed out in debates between mystics and rationalists, debates that are familiar territory to anyone who has studied medieval Jewish philosophy. On one side, there are philosophers who reduce the nature of angels to the philosophical minimum, because a more robust depiction of angels would be a threat to pure monotheism. To rationalists, angels, as beings that can be prayed to and can intercede for man, contradict the idea that the Bible emphasizes that “the LORD is God in heaven above, and upon the earth beneath: there is none else.” (Deut. 4:40). On the other hand, mystics see angels as an element within a varied and complex spiritual world that inhabits the space between God above and man below; angels are but one of a host of spiritual creatures in the four worlds that span from God to the physical world. The specific nature of angels is vague, a topic that is debated and debatable.

The very Hebrew word for angel is ambiguous. The word employed for angel, “Malach”, literally means “messenger”; the word “malach” can refer equally well to the young man carrying a package by bicycle from one downtown office to another, or the winged spirit carrying a message from God to man. Indeed, at several points in the biblical narrative, commentaries are unsure if the word “malach” refers to an angel, or just a flesh and blood messenger! I would argue that this ambiguity is no coincidence; the Torah intentionally chose to leave the identity of angels murky, to impart an important lesson. The Torah wants us to shift our gaze, and instead of searching for winged angels above, open our eyes to the everyday angels below.

In order to find “everyday angels”, one must appreciate the fact that God winks at man from time to time. “God has many messengers”, and sometimes the message is for us. Indeed, some of the Rabbis of the Talmud would listen to schoolchildren memorizing the Bible, certain that the verse the child was reciting contained a hidden message. And in everyday life, there are everyday angels, on a divine mission to make us stronger by encouraging us, protecting us, and even wrestling with us.

Sometimes, even rationalists like me can feel the presence of angels. My wife Lisa and I had struggled to have children into the third year of our marriage. One Friday night, after a long week, we chose to have dinner at home alone. As we were making Kiddush, we heard a knock on the door. Outside was a young Chassidic man with his very pregnant wife. They had been driving from Crown Heights to Monsey, but got stuck in traffic and had to get off the highway before Shabbat began. After finding their way to the Reform Synagogue, they ran into the Conservative Rabbi, who wisely directed them to our home, the house of the Orthodox Rabbi, over a mile away. (I guess the Mitzvah of welcoming guests brings all Jews together.). We had not prepared for guests, but managed to make them feel comfortable, and we shared our home and our food with our unexpected visitors. Lisa and I felt as if taking in guests that week was our special obligation; after all, that Shabbat was the Parsha of Vayera, where Abraham and Sarah show exceptional hospitality to three strangers who come by their tent.

Abraham and Sarah have a son one year later. And, as it turns out, after inviting in our unexpected pregnant guests, Lisa and I had twin boys ten months later.

This young husband and wife weren’t angels; but there’s no doubt in our minds that they were malachim, messengers from God. They came bearing good tidings, and the message that it’s important not just to fill our homes with children, but also to open our homes to guests.

They were everyday angels carrying an extraordinary message.
Posted by Rabbi Chaim Steinmetz at 7:45 PM

Anonymous said...
This comment has been removed by a blog administrator.
10:25 AM